Prompted by " Itzik Hasini", a Chinese teacher of Hebrew who has been documenting life in China during the virus: I  wish we had wise laws such as yours. What is permitted, what is forbidden to eat. All this would not have happened! Your Torah is very wise.” 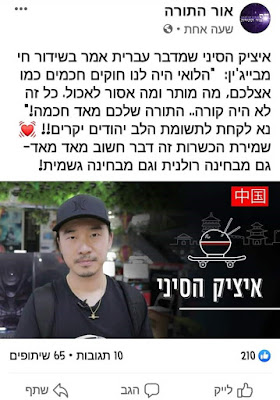 This Shabbat- Parshat Shmini, among other things, has the first extensive list of permitted and forbidden animals.( Lev 9 and following).
Since we don’t eat bats and pangolins, maybe he Is on to something.

But are we really healthier? Plus and minus-

In Italy, an epicentre of the new coronavirus outbreak, the death rate at the end of March stood at a sobering 11%. Meanwhile in neighboring Germany, the same virus led to fatality rates of just 1%. In China, it was 4%, while Israel had the lowest rate worldwide, at 0.35%.

Israel ranked eighth overall with 82.5 years on average, coming just behind Italy and Iceland. Japan ranked first overall with an average life expectancy of 83.7 years. The United States had an overall average of 79.3 years.

Paradox- Wealth does not = health:

"it’s generally accepted that the well-to-do live both better and longer lives than the poor. Like with other low-income people who eat what they can afford, rather than what’s good for them, the diet of haredim (ultra-Orthodox) is said to be less than wholesome. Also, as a group, they don’t seem to do much physical exercise. Many are obese.

And yet, according to the State of the Nation Report 2015 by the Taub Center, a leading research institute in Israel, life expectancy among haredi men is said to be three years higher than in the rest of the male population. And haredi women live 18 months longer than other women.

[Except when there is a coronavirus epidemic]

“ Religious people live four years longer than atheists, study finds
Abstinence, meditation and social ties may all be a factor in increased longevity

Abstract
It is claimed that of all classes of New York City's population, the Jews are the longest lived. Considering the manner in which the majority of the Jewish population of our great cities live, this is a remarkable showing, if true. The poorer Jews, as a rule, are rigid followers of the Mosaic law, and this would indicate to some extent the excellence of the sanitary provisions of that ancient code. Insurance men, however, it is alleged, while recognizing the temperance of the Jews as a factor, are inclined to think that this longevity is a result of natural selection, the weaker elements of the Jewish race having been gradually eliminated during centuries of persecution. There is still another possible factor to be considered. For centuries the Jews have become acclimatized, so to speak, to city life, and therefore may represent the class most resistant to such environment.

The Hispanic paradox, or Latino paradox, also known as the "epidemiologic paradox," refers to the epidemiological finding that Hispanic and Latino Americans tend to have health outcomes that "paradoxically" are comparable to, or in some cases better than, those of their U.S. non-Hispanic White counterparts, even though Hispanics have lower average income and education. (Low socioeconomic status is almost universally associated with worse population health and higher death rates everywhere in the world.)[1] The paradox usually refers in particular to low mortality among Latinos in the United States relative to non-Hispanic Whites.[2] First coined the Hispanic Epidemiological Paradox in 1986 by Kyriakos Markides, the phenomenon is also known as the Latino Epidemiological Paradox.[3]
[They have fewer fatalities now with COVID]

RELIGION 07/31/2014 12:15 pm ET
What Seventh-Day Adventists Get Right That Lengthens Their Life Expectancy
By Ryan Buxton
Statistics have shown that religion makes people happier, but it turns out it can help you live longer, too.

In an attempt to “reverse engineer longevity,” Dan Buettner has spent years researching the parts of the world where people live much longer than average.. . .  but there is one long-living group stateside. It’s the Seventh-day Adventists, who live an average of 10 years longer than the American life expectancy of about 79 years.
. . . what Seventh-day Adventists do right. That includes eating a plant-based diet and having “a social network that reinforces the right behavior.” Their religious beliefs are also a big help, he said. “They take this idea of Sabbath very seriously, so they’re decompressing the stress,” Buettner said. “About 84 percent of health care dollars are spent because of bad food choices, inactivity and unmanaged stress, and they have these cultural ways of managing stress through their Sabbath.”
***************************************************