Reflecting on 70 years since the Final Solution, the attack at the synagogue in Colleyville, and why are there no Jews in the Middle East.(outside of Israel)

What happened to the Middle East’s Jews

Follow this link for video of discussion. Starts at 1:45 into video.

Just 2 weeks ago, we had a discussion with Richard Hirschhaut, of the LA AJC. One of the questions I raised was of the  push by Islamist groups, either associated with Palestinians, or with the Muslim Brotherhood( in particular, CAIR, which claims to be the representative of US Muslims) to repeat antisemitic memes, and then back-track when caught.

Now, one week later, we had this horrible event, which could have ended in tragedy. It came just in advance of the 70th year since the notorious Wannsee Conference, which settled the fate of Europe’s Jews, in the Entloessung zur Judenfrage-The Final Solution of the Jewish Question. It was also just in advance of the International Holocaust Remembrance Day, Jan 27.

Attack on the Beth Israel synagogue would at first seem to have been the work of a deranged lunatic seeking the release of another deranged lunatic, Lady Al Qaeda,  Aafia Siddiqui.

However, even lunatics need outside input to trigger and guide their delusions.

What drove both of them ? Both were from  Pakistan. What about Pakistan?

This from Rob Eshman in LA Times:

Karachi-born Siddiqui, 49, came from an educated, devout Muslim family. … Massachusetts Institute of Technology and, in 1995, went on to obtain an advanced degree in cognitive neuroscience at Brandeis University, … 44% of undergraduates identify as Jewish.

…, Siddiqui tried to dismiss her lawyers because of their Jewish background and demanded that prospective jurors undergo DNA testing to determine if they had Jewish genes.

“Study the history of the Jews,” she wrote in a plea to then-President Obama. “They have always back-stabbed everyone who has taken pity on them and made the ‘fatal’ error of giving them shelter.” She added: “This why ‘holocausts’ keep happening to them repeatedly! If they would only learn to be grateful and change their behavior!!”

But in truth, antisemitic conspiracy theories dominate Pakistani textbooks, media and government. Why would Siddiqui believe anything else?.

( Op-Ed: The Texas hostage-taking was a symptom of conspiracy theories run amok

Pakistan is no outlier in the Moslem world on anti-Semitism:

The esteemed President of Malaysia:  In a speech made before the Organization of the Islamic Conference shortly before he left office, Mahathir claimed "the Jews rule the world by proxy: They get others to fight and die for them."[80] “We are up against a people who think. They survived 2,000 years of pogroms not by hitting back but by thinking. They invented socialism, communism, human rights and democracy so that persecuting them would appear to be wrong, so that they can enjoy equal rights with others. With these they have now gained control of the most powerful countries and they, this tiny community, have become a world power. . . .”(NY Times https://www.nytimes.com/2003/10/21/world/views-on-jews-by-malaysian-his-own-words.html)

Something has gone very sour in the Moslem world, far more so than in the Christian, Hindu, or Buddhist world:

USA- about the same for Canada, most Anglo countries, northern Europeans.

They sent him this gift a two years ago:

A jar of honey and affirming building a community based on inclusivity, solidarity, and respect.

In short:You should have  called on Israel to give back the Palestinian territory it has ilegally occupied

In Europe, Greece is an outlier-far ahead of Poland, Russia, or Ukraine 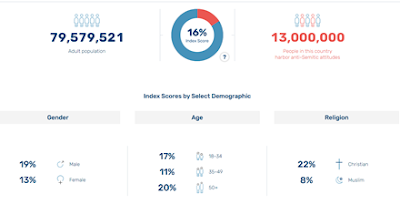 What about the Moslem world

Iran- to be fair-better than Christian Greece

I suspect more Iranians hate their Ayatollah regine more than they hate Jews!

But Egypt- at peace with Israel-partner against Hamas, Muslim Brotherhood, Iran

Jordan- at Peace with Israel

Odds of peace with our nearest neighbors-Gaza-West Bank

So- I go to my point, Where are the Jews of the Middle East today?

That was posed at the UN by Hillel Neuer of the UN watch:

This is the way that map looks: 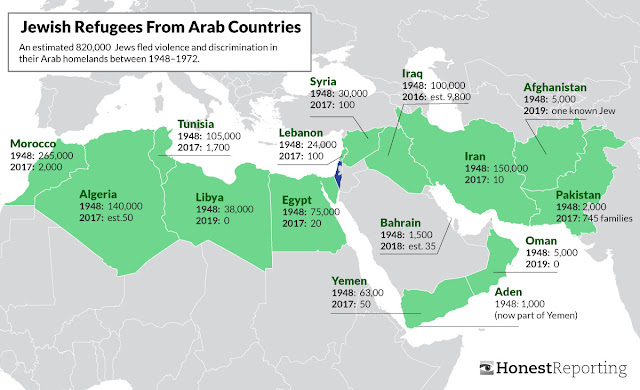 Why is it that the winds of antisemitism were pervading the Islamic world before the State of Israel, before Zionism?

Historic anti_Jewish edicts in Islamic law- no Jew may ride on a horse, stand higher than a Moslem, no synagogue higher than  a mosque,  must pay tax to be allowed to live.

Modernity= rise of nationalism-began with improved rights for minorities, and then went south from there- first case- in a large way-the Armenian genocide, which was an inspiration for Hitler. From that point, nationalism closed out all that did not fit neatly in the Islamic world =similar to European fascist states.

The reaction against modernity-

The Saudi compromise with Wahabi Islam= leave us alone, and build madrasas outside Arabia!

“The Muslim Brotherhood’s history of anti-Semitism goes back to its founding. Its leading Palestinian figure, Haj Amin el-Husseini, collaborated with the Nazis, declaring that Jews were the enemies of Islam and had been for 1,300 years. He made explicit appeals on the radio to Arab listeners to “kill the Jews.” In 1946, when Husseini returned to Cairo, he was enthusiastically welcomed by Hassan al-Banna, the Muslim Brotherhood’s founder. In a secret bulletin intercepted by OSS agents in Cairo, Al-Banna said of Husseini, “What a hero, what a miracle of a man. Yes, this hero who challenged an empire and fought Zionism, with the help of Hitler and Germany. Germany and Hitler are gone, but Amin Al-Husseini will continue the struggle.” The Muslim Brotherhood, Anti-Semitism, and Democracy | The New Republic

So, as we approach the International Holocaust Remembrance Day= Let’s see what is left of a once glorious Jewish presence despite subjugated and untouchable status.

Follow this link to see the original images that I presented on zoom discussion.

One of the images is of a magnificent synagogue in the Island of Djerna, Tunisia. Live was bad for the Jews, who mostly left, but that hasn't stopped the government from cashing in on Jewish tourism.

This is a link to amore extensive video: