Abraham, the tent dweller,versus Sodom, the Urbanites Reflections of Kristallnacht and Veterans Day

Reflections of Kristallnacht and Veterans Day

The Shabbat discussion is on this link: 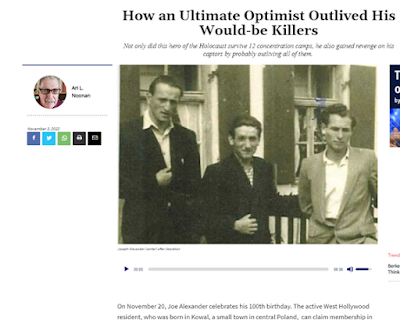 I also highlighted this news interview with Joe regarding the vile comments by Ye( Kanye) on Jews:
https://www.foxla.com/video/1135209
It lead directly into the discussion.

Then, we marked Veteran’s Day, in honor of our US veterans, but originally Armistice Day. To mark end of WWI- the War to end all wars, the War to Make the world safe for Democracy.

Such sad irony, that WWI led to WWII, for a variety of causes, but surely, one inevitable factor, that Hitler successfully used blaming the Jews to rise to power, and the world leaders failed to stop him in then persecuting Jews. Kristallnacht was a warning to the world what hatred of one’s fellow can lead to, the Jew as the canary in the coal mine.

The Jew as the eternal alien, the one commonality of hatred across Europe, North Africa, and Western Asia, Christian and Moslem civilizations, through antiquity and into modernity, even into secular and anti-religious governments, as Germany and the USSR. But, while Jews aren’t everywhere, some people will always be picked out somewhere as targets of the frustrations and failures of the general masses of humanity

Here, in contrast, we have the figure of Abraham, who is to be “ a blessing to the world”, who is to be the spiritual father of the three Abrahamic religions . 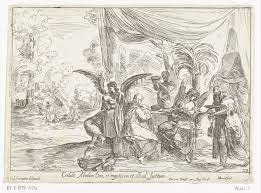 Abraham, open tent, greeting wanderers, in contrast- the urbanites of Sodom, who seek to rape  the strangers in their walls.

Bedouin of the desert- three and a third day rule: The guest must be made comfortable and cared for three and a third days. Even if he is an enemy who has come seeking shelter.( the next day, the two can go back to fighting!)  That tradition is well known in the Abraham accounts.

We have the story of Sodom- what happens when we become urbanized, we have more than enough- instead of becoming generous, we abuse those in need of help.

The Torah is not just denouncing the people of Sodom- it is a veiled reference to the people of Israel—made explicit in the story  of the concubine of Gibeah; Judges 19

The man is a Levite from Ephraim, the concubine from Judah.

11 When they were near Jebus and the day was almost gone, the servant said to his master, “Come, let’s stop at this city of the Jebusites and spend the night.”

12 His master replied, “No. We won’t go into any city whose people are not Israelites. We will go on to Gibeah.” 13 He added, “Come, let’s try to reach Gibeah or Ramah and spend the night in one of those places.” 14 So they went on, and the sun set as they neared Gibeah in Benjamin. 15 There they stopped to spend the night. They went and sat in the city square, but no one took them in for the night.

Judg 19:17 He happened to see the wayfarer in the town square. "Where," the old man inquired, "are you going to, and where do you come from?" 19:18 He replied, "We are traveling from Bethlehem in Judah to the other end of the hill country of Ephraim. That is where I live. I made a journey to Bethlehem of Judah, and now I am on my way to the House of YHWH, and nobody has taken me indoors. 19:19 We have both bruised straw and feed for our donkeys, and bread and wine for me and your handmaid, and for the attendant with your servants. We lack nothing." 19:20 "Rest easy," said the old man. "Let me take care of all your needs. Do not on any account spend the night in the square." 19:21 And he took him into his house. He mixed fodder for the donkeys; then they bathed their feet and ate and drank.

22 While they were enjoying themselves, some of the wicked men of the city surrounded the house. Pounding on the door, they shouted to the old man who owned the house, “Bring out the man who came to your house so we can have sex with him.”

Here is where it gets brutal:

23 The owner of the house went outside and said to them, “No, my friends, don’t be so vile. Since this man is my guest, don’t do this outrageous thing. 24 Look, here is my virgin daughter, and his concubine. I will bring them out to you now, and you can use them and do to them whatever you wish. But as for this man, don’t do such an outrageous thing.”

25 But the men would not listen to him. So the man took his concubine and sent her outside to them, and they raped her and abused her throughout the night, and at dawn they let her go. 26 At daybreak the woman went back to the house where her master was staying, fell down at the door and lay there until daylight.

Note, the contrast , that the Levite and his concubine would not spend the night with aliens, Jebusites, and then be brutalized by their own Israelites.

Let’s go back to Abraham, and how we can read his “ open tent” policy”

Why is Abraham to be the father of many nations?

We see how the Bible text hints at, and then Rabbinic tradition makes explicit= the sanctity of the human being.

God appeared* to him by the terebinths of Mamre; he was sitting at the entrance of the tent as the day grew hot.

When does this happen? The sentence before, Abraham has just been circumcised. Therefore he is sitting, while God appears, hence,. He can’t get up. So Rabbinc comments, “God comes to visit, to teach us “ bikur cholim”.

It is the 3rd day, and he is healing. God mad ethe sun glow hot, so there would be  no travelers to bother Abraham.

Looking up, he saw three figures standing near him. Perceiving this, he ran from the entrance of the tent to greet them and, bowing to the ground,

We, the readers, know they are angels. Does Abraham know that?

he said, “My lords!* If it please you, do not go on past your servant.

Who is Adonay( My Lords)  here?

Who is Abraham talking to?

If God appears to Abraham, with YHWH, and Abraham answers” My Lord-Adonay”, the Implication is God, and he is asking God to allow him to greet the strangers.

But , literal text,he is addressing the lead angel .

'ויאמר אדני אם נא וגו AND HE SAID, MY LORD, IF NOW etc. — He addressed himself to the Chief of them; calling them all “lords”, (אדני may mean “my lords”), whilst to their Chief he said “Do not I pray thee pass away”, for he knew that if he would not pass by, his companions would certainly remain with him. In this explanation the word אדני has a “profane” sense (does not refer to God, being merely a term of address, “Sirs”) .

Another explanation is that the word is “holy” (referring to God): he asked God to wait for him whilst he ran and invited the travelers. For although this is written after the words “and he ran to meet them”, yet the conversation took place beforehand.

What is the basis for this double entendre?

All the terms used in the Torah “ Adonay”My Lords, refer to God, sacred, except where clearly intended for general use, such as in this case of Abraham talking to the visitors. Said  in the name of Rabbi Chananyah..in the name of R. Elazar Hamodai,” Even here, it is the divine name, because hosting guests is as greater than receiving God’s presence.

Hence, the great contrast with Sodom and Gomorrah, and the cities of the plain, land of wealth and abundance, that becomes a Dead Sea.