Nehama Leibowitz- a Rashi for our day

Nechama Liebowitz- a Rashi for our day

I had the pleasure of sitting in Nechama Leibowitz’s class at the Hebrew University in a special course she gave for American students on Rashi and his methods back in 1969. Years later, when I lived in Israel and ran a program, for Jewish studies at Bet Berl for the HIstadrut, I hosted her as one of my guest lecturers ( as I also did for her equally famous brother, Yeshayahu Leibovitz).

She was a classic “ yekke” ( although the family hailed from Latvia) in her intellectual perspective and style.  Decorum was always important; we Americans were all chewing gum innclass, so she would say, in classical Biblical Hebrew, “ Lo le’ha’aolt gera” ( don’t regurgitate the cud), which we all realized is based on  the definition of a kosher animal, like a cow, “ maaleh gera”, that regurgitates its stomach contents to chew it again!.

Like other German- Jewish intellectuals of that period, she had her hallmark “beret”. 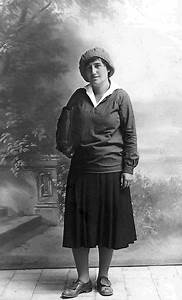 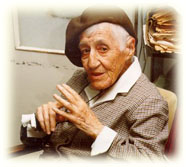 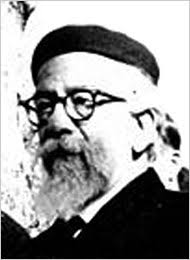 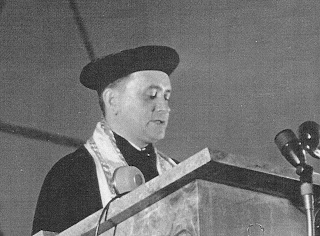 Nehama Leibowitz was born in 1905 in Riga, Latvia, exposed to Jewish and general ( which meant German) culture.  In 1919 the family moved to Berlin, where Leibowitz taught, wrote articles and studied for her doctorate at  University of Marburg on, Techniques in the Translations of German-Jewish Biblical Translations. Zionsit family- moved to Israel (c. 1930).

She traveled around the country on buses, in taxis and on airplanes teaching Bible and commentaries to teachers, new immigrants, soldiers, kibbutzniks and thousands of ordinary people. Taught at Religious Zionist Teacher’s Seminary, then , 1957, taught at TAU, earned professorship at Tel-Aviv University in 1968.

[ Note – Israeli universities, like Europe, do not give the title “Professor” easily, unlike US universities, where full professor rank is achieved much sooner . Israel, you had to wait until one of the older faculty has gone on to the next world, or at least so it was back in the day]

Taught at Hebrew University and was awarded several prizes in the course of her life, including the prestigious Israel Prize in the Field of Education (1956).

In 1942, Leibowitz began mailing out stencils of questions on the weekly Torah reading to anyone who requested them. These worksheets, which she called gilyonot (pages) would be sent back to her, and she would personally review them and return them with corrections and comments. They became very popular and in demand by people from all sectors of Israeli society. In 1954, Leibowitz began publishing her "Studies", which included many of the questions that appeared on her study sheets, along with selected traditional commentaries and her own notes on them. Over time, these studies were collected into five books, one for each book of the Torah. The five books were subsequently translated into English by Rabbi Dr. Aryeh (Laibel/Leonard) Newman [.I have several volumes myself and they have always served as valuable food for thought for preparing commentary on the weekly portion]

She was a deeply religious person, but of the sort that emphasized halakhah and Torah study, moral responsibility, ethics and humanistic focus, rather than ecstatic and mystical dimensions, which she feared might prove shallow or transient. Thus she had little to do with Hasidism or Kabbalah.

When asked to describe her methods she replied, "I have no derech... I only teach what the commentaries say. Nothing is my own.” [6]

[Note: That is what made Rashi famous—it was not so much his original statements, as his decision what sources he would choose, and thereby shaped the classic Jewish understanding of the Chumash.]

“ a new conception of Torah study. The Yeshiva world focused almost exclusively on Talmud, and the secular world interest lay in Biblical Criticism, archeology and history. She—and her students after her—revolutionized the world of Torah study; and today, Leibowitz’s question, “What’s Rashi’s difficulty?” is commonplace, as is her method encouraging comparison and evaluation of commentaries.”

Leibowitz adopted and expanded upon various new techniques for literary analysis. She felt that these were very close to the Midrashic method and that of the Sages and commentaries, with their close reading of the text …, indeed, one of the pioneers in the literary-aesthetic approach to Biblical interpretation. Some of her work also bears an affinity to postmodernist theories.

She was noted for her modest demeanor coupled with wry wit, and always preferred the title of "teacher" over the more prestigious "professor." In accordance with her request, "מורה" (morah, "teacher") is the only word inscribed on her tombstone, other than her name and dates.

[Regarding today’s squabble about the use of “ Dr”. title for a non -MD.

My father had a doctorate in Poli Sci. He came to Berlin to study Rabbinics. He knocked on the door of one of his professors and when asked” Who is it “ replied “ Weinberg.” To which the answer was,” You may not say “ Weinberg”- you must say “Dr. Weinberg”. You can use the name, without title, only when you are famous.  In European society, tiles are much more important than in American society. My father was Rabbiner Dr, and my mother was Frau Rabbiner D. Here, in the heydays of hippiedom and New Left, we, as young Rabbis , were going out as ‘ Norb”]

She was strict on marking mistakes in Hebrew test papers, and hated the code-switching "Heblish" of some anglophone immigrants. [To this charge, I admit guilty as a young graduate student a Hebrew U]

Leibowitz also opposed the ideas of feminism and the feminist movement. . . While she upheld equal pay and rights for women, Leibowitz did not consciously desire to change the balance of designated gender roles within traditional Jewish society. Leibowitz refused to acknowledge that she was a revolutionary in any way; but ultimately her unique achievements changed Orthodox society’s perception of a woman’s capabilities and undoubtedly opened doors for the female Torah scholars who followed; this itself is proof of the power of gradual, evolutionary change.( https://jwa.org/encyclopedia/article/leibowitz-nehama)

Here is the text of her work on this weeks Torah reading, Miketz ( Genesis 44:1 ff) on Joseph and Pharaoh’s dream. In my discussion, I show how she is eclectic in her sources, including traditional as well as non-Orthodox commentators, and, in truly Talmudic dialectic style, pits one against the other to lead the reader to her conclusion. I have added short notes on her sources as well .https://youtu.be/WvPsL05LhuE 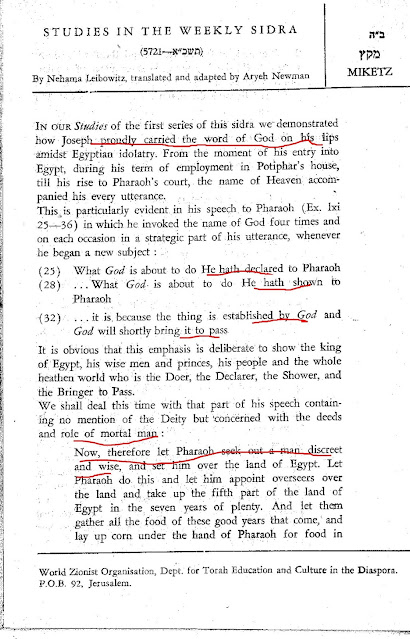 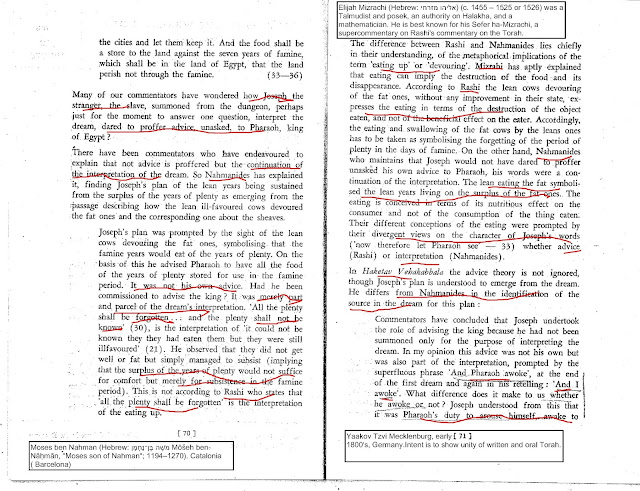 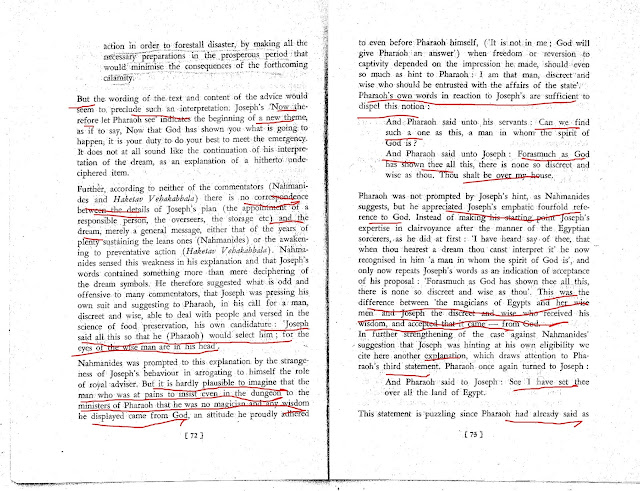 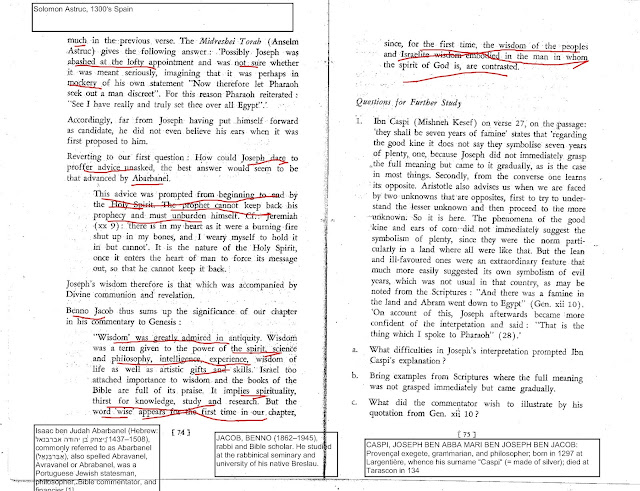