Giving Thanks on Thanksgiving

Hakarat Ha Tov- Acknowledge when good has been received

Thanksgiving was never intended as a day to spout platitudes of our greatness, but about us, as a nation, giving thanks for the great benefits we have in life. It is part & parcel of the religious sensibility of American society, not to be confused with any establishment of a religion by government, but a common shared national piety. While this is pooh-poohed in intellectual circles, especially by our Jews, it is a concept that is very very Jewish.

Two weeks ago, a dear friend of ours , Hannah Elter,passed away , and as I was looking for a thought to give the family, I came across notes from the wedding I did for her son. She was always proud of the fact that her family was descended from from one of the great teachers of the Hasidic movement, Rabbi Pinhas of Koretz. It was the movement of Hasidism which led our people from gloom and despair to a worship of God through the heart, through and upbeat spirit and soul.

When people asked Rabbi Pinhas himself "What do I get as a reward for all my labors and efforts to be a good Jew, he responded, “What better reward can on get from God than the reward of being alive, of beholding the sun shine, and to have the joy of light and life?"

This idea, that we should be thankful for the reward of life, at a time when so many of us are feeling as if a sword were hanging over our heads, is very central to keeping our mental and spiritual selves in balance.  In Hebrew, there is the phrase “hakarat hatov.” Recognizing the good that is given us. We well know the word “ Todah”, thank you, with its grammatical variations, “Modeh”, I thank,” “Hodayah”-Thanksgiving,as in Chag Hahodayah-Thanksgiving Day.

So, I have a few quotes to prompt us in our thinking this day:

Rabbi Yohanan said in the name of Rabbi Shimon ben Yohai: From the day the Holy One, Blessed be He, created the world, no one thanked the Holy One, Blessed be He, until Leah came and thanked Him, as it is stated: [“And she became pregnant and gave birth to a son, and she said,] ‘This time I will give thanks to God,’ [and thus he was called Yehuda”] (Genesis 29:35).Berakhot 7b

“Modeh Ani Lefanecha Melech Chay Vekayam she-chechezarti bi nishmati, bechemlah rabbah emunatecha.- I give thanks to you, living- everlasting King, that you have returned my soul to me with great kindness is your faithfulness to us.”

“Who is wise? The one who learns from everyone!
Who is mighty? The one who rules over themselves!
Who is rich? The one who is happy with what they’ve got!
Who is honored? The one who shows honor to others!” -Pirke Avot 4:1

4)    The prayer said upon recovering from illness, or an accident, or a long trip ( even across town in traffic) Ha Gomel:

Translations: Blessed are You, L-rd our G‑d, King of the universe, Who bestows kindness upon the culpable, for He has bestowed goodness to me.

Chayavim=Even the Guilty, not deserving, are protected. 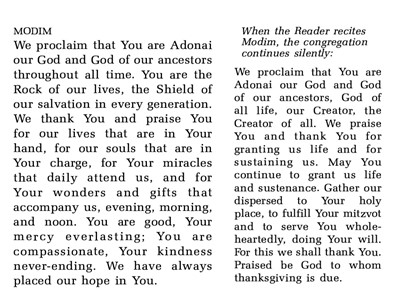 For all who struggling with feeling grateful at a time of stress like this, I found this a wonderful resource:

Posted by Rabbi Dr. Norbert Weinberg at 10:49 AM