For video presentation, go to: 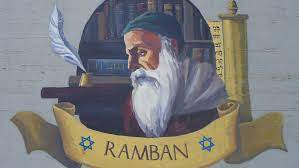 Spanish Talmudist, exegete, and physician; born at Gerona (whence his name "Gerondi") in 1194 .Besides rabbinics, Moses studied & practiced medicine…extensive knowledge of philosophy. Just past puberty, began to be counted among the Talmudical authorities of his time. In his sixteenth year he commenced to compose compendiums of some parts of the rabbinical law… To him the wisdom of the ancients was unquestionable, and their utterances were to be neither doubted nor criticized.

He lived in Catalonia, hence, his involvement in the Disputation of Barcelona, which he won, and as a result, was exiled. Moses left Aragon and sojourned for three years somewhere in Castile or in southern France. In 1267 he emigrated to Palestine, and, after a short stay in Jerusalem, settled at Acre, where he was very active in spreading Jewish learning, which was at that time very much neglected in the Holy Land. … wrote the greatest of his works, commentary on the Pentateuch. Although surrounded by friends and pupils, Moses keenly felt the pangs of exile. "I left my family, I forsook my house. There, with my sons and daughters, the sweet, dear children I brought up at my knees, I left also my soul. My heart and my eyes will dwell with them forever."

Moses died after having passed the age of seventy, and his remains were interred at Haifa, by the grave of Jehiel of Paris. died in Palestine about 1270

the rapid progress made by Greco-Arabic philosophy among the Jews of Spain and Provence after the appearance of the "Moreh Nebukim" gave rise to a tendency to allegorize Biblical narratives and to refuse credit to the miraculous element in the Talmud. Moses strove, against , went to the other extreme…

[Note-refused to be part of “ cancel culture “ of his day.]

However, the great respect he professed for Maimonides … led him to assume the rôle of a conciliator. In a letter addressed to the French rabbis he draws attention to the virtues of Maimonides . . . As to the "Guide," it was intended not for those of unshaken belief, but for those who had been led astray by the works of Aristotle and Galen.

Commentary on the Pentateuch.

His chef-d'œuvre. … Moses brought into play his peculiar genius, his warm and tender disposition, and his mystical visions. His exposition, rendered in a most attractive style and intermingled with haggadic and cabalistic interpretations, is based upon careful philology and original study of the Bible. . . .While Maimonides endeavored to reduce the miracles of the Bible to the level of natural phenomena, Moses emphasized them, declaring that "no man can share in the Torah of our teacher Moses unless he believes that all our affairs, whether they concern masses or individuals, are miraculously controlled, and that nothing can be attributed to nature or the order of the world." Next to belief in miracles Moses places three other beliefs, which are, according to him, the foundations of Judaism, namely, the belief in creation out of nothing, in the omniscience of God, and in divine providence.

Moses' share in the development of the Cabala, though universally recognized, was rather moral than literal; he sanctioned it by the great authority of his name, but not by any contributive activity.

He finds, In accounts of the Torah hints of the later history of man. Thus the account of the six days of Creation constitutes a prophecy of the events of the following six thousand years, and the seventh day is typical of the Messianic millennium. Jacob and Esau are the prototypes of Israel and Rome, and the battle of Moses and Joshua with the Amalekites is a prophecy of the war which Elijah and the Messiah ben Joseph will wage against Edom (Rome) before the arrival of the Messiah ben David, which was fixed by the commentator for the year 1358.

Here is an example

On Love Your Neighbor: Compare

MAIMONIDES HILCHOT DEOT: LAWS OF COUNSEL It is a mitzvah for every human to love each and everyone from Israel as he loves his own body.

NACHMANIDES ON "BE LOVING TO YOUR NEIGHBOR" The reason behind, "be-loving to your neighbor (as one) like yourself" is in fact an exaggeration for no human's heart can accept loving one's fellow as one loves one's own soul, and furthermore Rabbi Akiva already learned that "your life comes before the life of your friend." It means that it is a mitzvah to love one's friend through all the good things that he loves himself, and it is possible that since the verse says "to your neighbor" (instead of merely stating "loving one's neighbor like yourself") The verse is comparing this love to the commandment to love the sojourner (Leviticus 19:34 where it says that you should be-loving to him as yourself) i.e. to make the love of both comparable in his mind. . . .

Views on Marriage- Iggeret Hakodesh- It is either his work ( earlier assumption) influenced by him.

It was copied in entirety by Rabbi Yisrael Elnekaveh (d. 1391in  Menorat ha-Meor, an attribution to the Ramban.From there , recopied widely.See below- Yemenite manuscript Printed text with German translation

The basic notion of the Iggeret ha-Kodesh is that sexual relations between husband and wife are sacred and that the state of both husband and wife during intimacy determines the character of the future child. The child’s nature and essence are determined by its parents’ spiritual consciousness and the holiness of their intentions at the time of conception.

There must be an absence of the lower desires and appetites, of the seeking after pleasure in eating, drinking, and cohabitation: and, in short, every pleasure connected with the sense of touch. (Aristotle correctly says that this sense is a disgrace to us, since we possess it only in virtue of our being animals)

Thus counter, by the Iggeret Hakodesh:

“The matter is not as Rabbi Moses of blessed memory thought and believed in his Guide to the Perplexed, when he praised Aristotle’s statements. … Heaven forbid! Matters are not as the Greek work states, since this work contains subtle traces of heresy. If that heretic Greek had believed that the world is renewed by intent, he would not have said that. But we, who possess the holy Torah, believe that the blessed God created everything as His wisdom decreed and created nothing shameful or ugly. For if we say that copulation is shameful, then the sexual organs are contemptible. But God, blessed be He, created them according to His word: ‘And you established them….”

If you want to see how this was applied, see the movie Yentl or A Stranger Among Us where it is quoted.

1263, in the presence of King James of Aragon, with the apostate Pablo Christiani. The latter, failing to make proselytes among the Jews of Provence, to whom he had been sent by his general Raymond de Penyaforte, requested King James to order Moses to take part in a public disputation. Relying upon the reserve his adversary would be forced to maintain through fear of wounding the feelings of the Christian dignitaries, Pablo assured the king that he could prove the Messianic claims of Jesus from the Talmud and other rabbinical writings. Moses complied with the order of the king, but stipulated that complete freedom of speech should be granted, and for four days (July 20-24) debated with Pablo Christiani in the presence of the king, the court, and many ecclesiastical dignitaries…

Views on the Messiah.

As the disputation turned in favor of Moses the Jews of Barcelona, fearing the resentment of the Dominicans, entreated him to discontinue; but the king, whom Naḥmanides had acquainted with the apprehensions of the Jews, desired him to proceed. The controversy was therefore resumed, and concluded in a complete victory for Moses, who was dismissed by the king with a gift of three hundred maravedis as a mark of his respect.

The Dominicans claimed victory and he felt constrained to publish a response ..Pablo selected certain passages …as blasphemies against Christianity and denounced to his general Raymond de Penyaforte. A capital charge was then instituted, lodged with the king. … Moses admitted that he had stated many things against Christianity, but he had written nothing which he had not used in his disputation in the presence of the king, who had granted him freedom of speech. The justice of his defense was recognized by the king and the commission, but to satisfy the Dominicans Moses was sentenced to exile for two years and his pamphlet was condemned to be burned. He was also fined, but this was remitted as a favor to Benveniste de Porta, Naḥmanides' brother (Jacobs, "Sources," p. 130). The Dominicans, however, found this punishment too mild and, through Pope Clement IV., they seem to have succeeded in turning the two years' exile into perpetual banishment.

So now, here is a segment from a dramatization:Originally a play, then adapted to British TV

In 1263, King James I of Aragon organizes a debate between representatives of Judaism and Christianity regarding whether or not Jesus was the Messiah.Director: Geoffrey Sax

What about the Talmud  https://youtu.be/lIyhC0vnRYc?t=734

To 15:09 The Talmud as non binding, Jewish key principals open to interpretation

Has the Messiah Come? https://youtu.be/lIyhC0vnRYc?t=948

The proof of history

to 27:50 Messiah will come only when the world is prepared

Fear of repercussion against the Jews by the Dominicans for revenge

stop at 37:50 a side discussion between the Rabbi and the king

The King justifies his support of Nachmanides:

A final note as the rabbi leaves, exiled by the Dominicans and the Pope because he won the dispute: