Last week, our Torah reading left off with Jacob running for his life from his vengeful brother. This Shabbat we have the story of Jacob and the ladder with the angels going up and down as a sign of reassurance as he runs from the obvious danger of a brother who would kill him, into the hands of an uncle-and  father-in-law—who abuses him over and again, as the Midrash and the Haggadah say it: “Arami oved Avi”-the Aramean Lavan tried to kill my father”.

I'm going to skip ahead skip ahead from last week's stealing of the birthright ( per Esau) or buying it for Anderson’s split pea soup( nezid adshim, per Jacob) 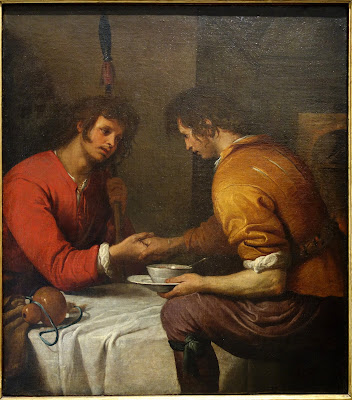 to this week's flight and angels up and down the ladder 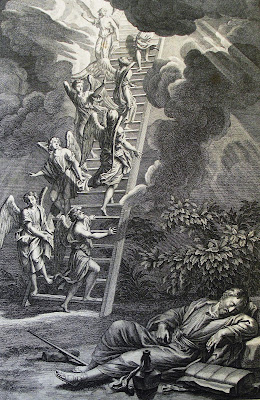 and ahead to next week where the two brothers reconcile.

Jacob is about to meet his brother upon his return. he is very afraid we know he divides up his camp into two parts so that if Esau attacks one part the other part can escape. we know the vision of the wrestling with the Angel as Jacob struggles with himself and then he comes to Esau . Jacob essentially grovels and Suddenly, Esau, instead of killing, kisses. 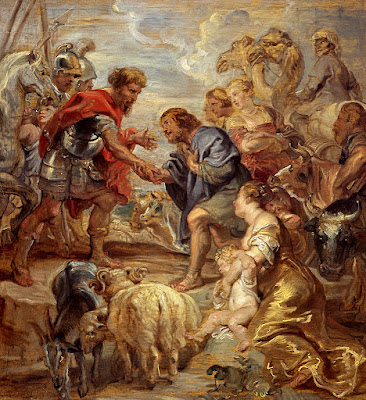 Regarding dots over the word for Kiss:

Problematic- what did Rabbi Shimon Bar Yichai mean when he said “halakhah”, since that means an obligation. Not that Esau has a particular grudge, going back to the birthright, but that it embedded in his nature, obsessive-compulsive.

Over the course of time, “Edom” became a code name for the Roman Empire, and then, the Holy Roman Empire, Christianity. Thus, the Jew was caught between the Christian and Muslim world, the Edomites and the Ishmaelites. Cousins, on both sides, “kissing cousins”, who don’t get along.

The artist, Rubens,above, must have known of this midrashic metaphor, so that  Esau and his troops re depicted in Roman armor, while Jacob, the middle easterner, uses camels.

Is there a lesson from this?

This from the Bible commentator Obadiah Sforno, Italian Rabbi and philosopher, during the Renaissance:

“His attitude changed suddenly when he realized to what extent Yaakov had humbled himself before him.

It is of great concern to us seeing that we live among the descendants of Esau, people who are arrogant, consider themselves invincible. Yaakov’s conduct vis a vis Esau teaches that the only way to escape the sword of Esau is through self degradation and gifts.

If the Jewish people during the period of the second Temple had taken his advice to heart, the Temple would not have been destroyed. Rabbi Yochanan ben Zakkai testified to this when he said ‘if not for the militant extremists the Romans would not have destroyed the Temple.’”

Now, this attitude was very true for most of Jewish history- we made it through by often laying low. It may have been Jesus that said “ Turn the other cheek”, ( actually, as a devout Jew, quoting from our part of the book ) but that was the survival strategies of Jews for centuries.

So, the Rabbis summed up our agreement with the world (Ketubot 111 a)(playing on a phrase in Song of Songs-“ I make you swear not to arouse my lover”)

God forced the Jews to two oaths, and the gentiles to one:

And Not to rebel against the nations

And for the nations- not to enslave the children of Israel too much!

Is it still valid.? Was that oath violated during the Holocaust?

I couldn’t help but think of this when I watched the Spielberg movie Fabelman, his own theatrical version of his life.

As a loan Jewish student in our high school in Northern California, the hero of our story is picked on and beaten up as a Christ killer. How does he take revenge?

He plays his injury to his advantage, gains the sympathy of the girls in school.

Volunteers to be the videographer of the senior ditch day and plays his movie at the senior prom. Lo and behold against all expectation he makes the villain, the one who bullied him ,look like a hero.,

Here is the great twist. The bully now breaks down in total frustration because he has been pretending all along to be some kind of superhero in the local school when in truth he knows he is incompetent and failing in many ways. To be portrayed as a hero by his Jewish antagonist is too much for him.

So here is the Jacob meets Esau in a modern version. The rival brothers meet and one kills the other with kindness,so Sammy kills the anti-semite with kindness.

It sounds good. Again, quoting Jesus, Luke 6:30 And if someone takes your cloak, do not withhold your tunic as well. 30Give to everyone who asks you, and if anyone takes what is yours, do not demand it back.

But what we know, is that Jesus is referencing Proverbs 25:21

21 If your enemy is hungry, give him food to eat, and if he is thirsty, give him water to drink. 22For in so doing, you will heap burning coals on his head, and the LORD will reward you.…

(Great Christian theologian and righteous doctor, Albert Schweitzer put it, it is end of days theology—the end is coming soon, so why fight-God will do it! It was not a philosophy for all ages.)

So, if you are weak, use jiu-jitsu, use the enemy’s weakness and play on it.

Still, is it a viable strategy? Was it viable during the Holocaust? Did not the nations of the world violate that Talmudic oath, not to oppress the Jews overly much? Have not the nations of the world, at the UN this week once again violated their obligation to the Jewish people by declaring the establishment of Israel a “Nakba”, a catastrophe? Do we solve anti-semitism by playing the sweet guy?

Not all the Rabbis were pleased with Jacob’s groveling:

At the moment Jacob said to Esau” My Lord”, the Holy One told him: Because you demeaned yourself in front of him, and called him “ My Lord “ 8 times, (I swear on) your life, his descendants shall rule for eight generations before your descendants will rule.!w-

Now, go from theoretical to real:

So, I am opening the floor for your own experiences, with anti-Semitism, or bullying. How you dealt with it.

I will say from my own experience, growing up as an immigrant, in this country, that my experience, has been blessedly charmed. When I was in 1st and 2nd grade we were in Manhattan in community of Jewish Holocaust survivors and I went to a Jewish school run by survivors ,very Jewish .  My father made me wear a beret on the street, which was the German Jewish style, and I hated it. I wanted to wear the same kind of cap that my classmates did. My father taught me that there's nothing special in being like everybody else.

So , I practiced that growing up.

A few years later we moved to a small town in Ohio. I was one of the few Jewish children in the school and when it was my turn to lead the Christian “Lord's Prayer” as was the custom in those days. I told the teacher ( I was only 9 years old at the time) I didn't think it was the right prayer for me to say. The teacher was very understanding and said I could lead any prayer I wanted. So when it was my turn I taught the class Shema and had them sing Hatikvah. and I never had a drop of trouble and nobody ever bugged me because of it , even though, when the word got out to the members of the Jewish community, they were in a panic!

We moved back to a city with a larger Jewish community for a few years and then my father took a congregation again this time in a town with very few Jews and I was one of the few Jewish kids in high school . No one ever picked on me or bothered me, and this was in West Virginia, where the most famous Senator and great Majority leader of the Democrats, a liberal,  Robert Byrd , had made his name by being a member of the Ku Klux Klan. But I guess I was so Jewish that instead of turning against me that everybody respected me and I was in everybody's good graces. I myself used to hang around at the local YMCA with kids of mixed racial and modest backgrounds. Only once was I bothered by a bully, not because I was Jewish, but because I trudged along with a heavy briefcase, because I was too brainy—and I just walked away, and nothing happened. A charmed life. Maybe, it helped that by then, I was also a little more buff than the Fabelman character.

As for missionaries, like in the Spielberg movie, one of my friends was the daughter of a local Seventh Day Baptist missionary- Christians, Shomeri Shabbos-—She never tried to bring me to Jesus, never, but only sympathized with me because we were the only two kids in the high school – who couldn’t attend the parties and games on Friday night!!

So my experience was that if you are for yourself , never ashamed of yourself and never bowed down, you are in. But I would want to see what other reactions others have. Not just anti semitism, but verbal or physical attacks, on race, ethnicity, sexual orientation.

Overseas, in Europe, Latin America, or Iran, or here in US

Doug Workman shared his experience growing up ,when he learned to stand his ground, and the bullies vanished.

Posted by Rabbi Dr. Norbert Weinberg at 11:44 AM