Joseph is the first Hegelian

Several weeks ago, when we on Covid break and a few of our members held a zoom gathering while I was away, the topic of Jacob came up. The question was raised,” How could we find some redeeming qualities to Jacob?” 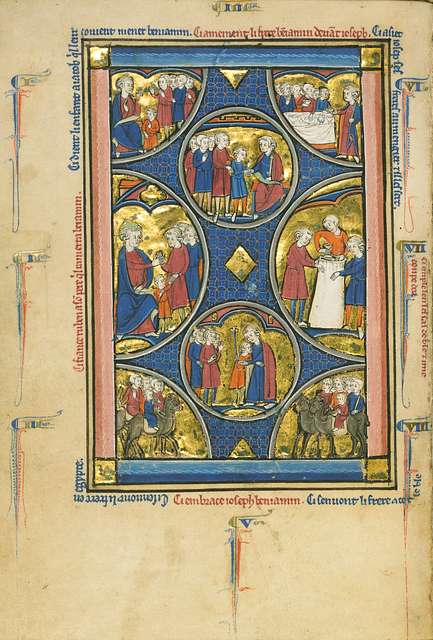 Indeed at birth, he grabs on to his brother by the heel, buys his birthright, then steals his birthright, he is involved in convoluted schemes to outwit his scheming father in law, he wrestles an angle but grovels in front of his brother. When his  sons massacre the people of Shechem, he mumbles his disapproval, not because of morality, but, expediency—the people will take revenge on us and we are few and weak. His sons are the ones to display gumption, even if we deplore their action: Our sister is not a prostitute. He only expresses his anger against the two key sons, Simeon and Levy, on his deathbed:

Cursed be their anger so fierce,And their wrath so relentless.
I will divide them in Jacob, Scatter them in Israel.( Gen 40 7).

He admits of the bitterness of his life. When he introduces himself to Pharaoh

“My years of life have been few and bad”.

This is a fairly well known image, of the famous March in Selma Alabama, where the Preacher and the Rabbi marched arm in arm. 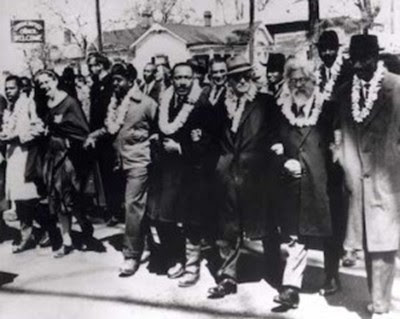 The two were very close, not just in political  terms, but also in a common religious sensibility.

A propos of this weeks portion, when we begin the book of Shemot, Exodus, I have this noted paraphrase of the dialog between Moses and Pharaoh.

His first meeting with Dr. King – in a conference about religion and race in Chicago, 1963 – he opened his most famous speech with a Drasha about our Parasha.

: At the first conference on religion and race, the main participants were Pharaoh and Moses. Moses’ words were: “Thus says the Lord, the God of Israel, let My people go that they may celebrate a feast to Me.”

While Pharaoh retorted: “Who is the Lord, that I should heed this voice and let Israel go? I do not know the Lord. I will not let Israel go.”

The outcome of that summit meeting has not come to an end. Pharaoh is not ready to capitulate. The exodus began, but is far from having been completed.

In fact, it was easier for the children of Israel to cross the Red Sea than for a Negro to cross certain university campuses.

But I want to touch on another quotation, this one from the Rev King,

We shall overcome because the arc of the moral universe is long but it bends toward justice. National Cathedral, March 31, 1968

I want to show where this concept of an arc bending towards justice has its roots.

That takes me back to the topic I began last week. We talked about the almost fatal flaws of Jacob.

1st- while we can’t speak for every line of the Bible- we can certainly attest to a veracity in it. I like to think that one of the best testimonies of the truth of the text of the Bible is its general honesty.

Everyone therein  has a flaw, sometimes, a fatal flaw. Our Biblical texts describe a rather ignoble origin of the Jewish people.

Rebels and disbelievers after the Exodus, the Red Sea and Sinai.

The wild, wild West ( West of the Mesopotamia) of the period of Judges—again, backsliding, followed by heroic judges, followed by backsliding again. Tribe against tribe- Benjamin is almost wiped out. Our English word Shibboleth comes from a verbal trap used by the Gileadites to kill Ephraimites.

As for the Book of Kings—it would make Shakespeare’s Kings in his historical plays blush with envy.

Then, we go to the Prophets, and we could only say that we never heard any enemy of the Jewish people use such inflammatory language against us. This wording will be used against us in the centuries to follow by both Christians and Moslems.

In truth, both Christian and Muslim scriptures use our very own prophets to attack us.

“ For you suffer the same things from your compatriots as they did from the Jews,who killed both the Lord Jesus and the prophets and persecuted us; they do not please God, and are opposed to everyone,g ( I Thessalonians 2:15)”

Why this glaring honesty. Why this very unvarnished picture of our own history.

It comes from an underlying theory of history, one which has become the foundation for all future theories of how the world operates—the Hegelian movement of civilization to greater liberty, or the Marxist movement of history to a liberation from economic forces.

It is in our Torah portion,  in  a small cycle version: 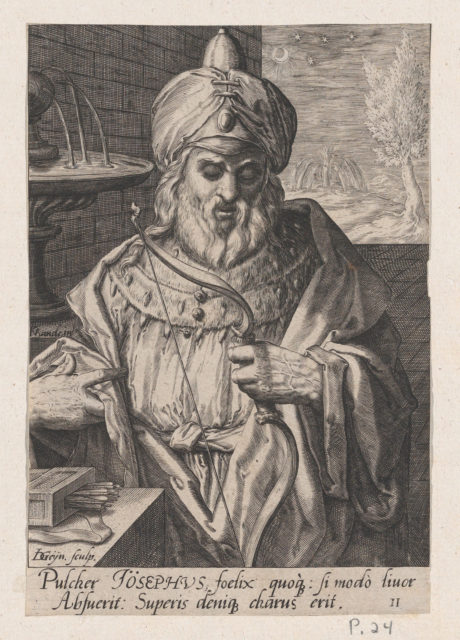 Joseph introduces himself to his brothers, and states:

Now, do not be distressed or reproach yourselves because you sold me hither; it was to save life that God sent me ahead of you.Gen 45:5.

He repeats it now in the last verses of Genesis:

When Joseph’s brothers saw that their father was dead, they said, “What if Joseph still bears a grudge against us and pays us back for all the wrong that we did him!”

So they sent this message to Joseph, “Before his death your father left this instruction:

So shall you say to Joseph, ‘Forgive, I urge you, the offense and guilt of your brothers who treated you so harshly.’ Therefore, please forgive the offense of the servants of the God of your father’s [house].” And Joseph was in tears as they spoke to him.

His brothers went to him themselves, flung themselves before him, and said, “We are prepared to be your slaves.”

But Joseph said to them, “Have no fear! Am I a substitute for God?

Besides, although you intended me harm, God intended it for good, so as to bring about the present result—the survival of many people.

And so, fear not. I will sustain you and your dependents. Thus he reassured them, speaking kindly to them. “(50:15 ff)

We are then given a hint as why all this has come to pass in the next verses, as Joseph himself lies on his deathbed:

At length, Joseph said to his brothers, “I am about to die. God will surely take notice of you and bring you up from this land to the land promised on oath to Abraham, to Isaac, and to Jacob.”

So Joseph made the sons of Israel swear, saying, “When God has taken notice of you, you shall carry up my bones from here.”

Joseph died at the age of one hundred and ten years; and he was embalmed and placed in a coffin in Egypt. “

Look at how each event in the lives of the founding fathers and mothers plays out.

Every event has its opposite reaction-tit for tat- or as the Jewish term is” Midah k’neged midah”,measure for measure, what goes around, comes around. Fate is arbitrary, blameless; karma is payback for what was done, unkown and unknowable, in a previous life. But this is in real time, real life consequences, real time responsibility for ones actions.

At the same time, this comedy of errors ,is part of something greater.

We realize that this entertaining story, from Adam to Noah to Abraham, the tensions between the siblings in each generation, the squabbles between the wives, each in its way is setting into motion something much bigger, which Joseph can only begin to grasp-the descent to Egypt, the enslavement, the liberation , the revelation, the sanctuary-and in later Jewish, Christian and Islamic theology, leading to an ultimate redemption of the universe and of humanity.(Mashiach-Messiah-Masikh/Mahdi)

This is the central point of the great work of philosophy, The Kuzari by R Judah HaLevy. We learn the general truth of our faith from the particular.

So why do we have the flawed people instead of the saints to begin with?

King David is a prime example, much more so than Jacob- David is, in tradition, the “ Arthurian:, Once and Future King, the prototype of the ideal King who will lead the children of Israel back to glory in the Messianic era. There is David the ideal, and David the real, especially when compared to his nemesis, King Saul.

Zutra bar Tubia taught in the presence o f Rav Judah.). God told David, “David, you sing a song on the fall of Saul! If you were Saul, and he David, how many times would I have destroyed Davids for him!”

Said the Holy One to David, “Why do you curse my anointed one? You say, ‘All my enemies will be frustrated and stricken with terror(Psalm s 6:11). Do you call Saul an enemy! As it says, “On the day God saved him from the hand of his enemies, from the hand of Saul ” (II Samuel 22:1). He said to him, “Lord of the world, intentional sins are before you as mere errors, as you said, ‘Errors, who can understand?’” (Psalms 19:13). (Midrash Tehilim 7:1)

Said Rav Huna: “How little does a person suffer if the Lord helps him. Saul committed one sin, and was held accountable; David committed two sins, but was not held liable! Saul with one sin - the incident of Agag. But what of the incident of Nob? It is after the incident of Agag that the text says, I repent that I have anointed Saul to be King’ (I Samuel 15:11). What were David’s two? The killing of Uriah and the incitement (to census, according to Rashi). Is there not also the incident of Bat Sheva? He paid for it.” (Yoma 22b)

Said Rav Judah in the name of Samuel, “Why did the house of Saul not continue to reign? Because he had no faults, just as Rav Yohanan in the name of Rav Shimon bar Yehozedek said, One does not appoint an individual to the position of leader of the public unless a box of lizards hangs behind him (a history of sin in the family), so that if his mind errs, they can say, Look behind you. ”

Saul s modesty extended to physical discretion, to the detriment of David s own lack of shame:

( from essay my essay. Published in Conservative Judaism, Vol. 33 No. 3 Copyright © 1980 by the Rabbinical Assembly KING SAUL’S FORTUNE AT THE HAND OF THE HOMILISTS )

In other words, we , in our daily lives, control the micro events. We are held accountable for these. However, the macro-events- the course of world history, works its own way around and about us.

I want to conclude with an essay by noted sociologist, Will Herberg, on the concept of Bible as History, Heilgeschichte;; Sacred or Salvational history. 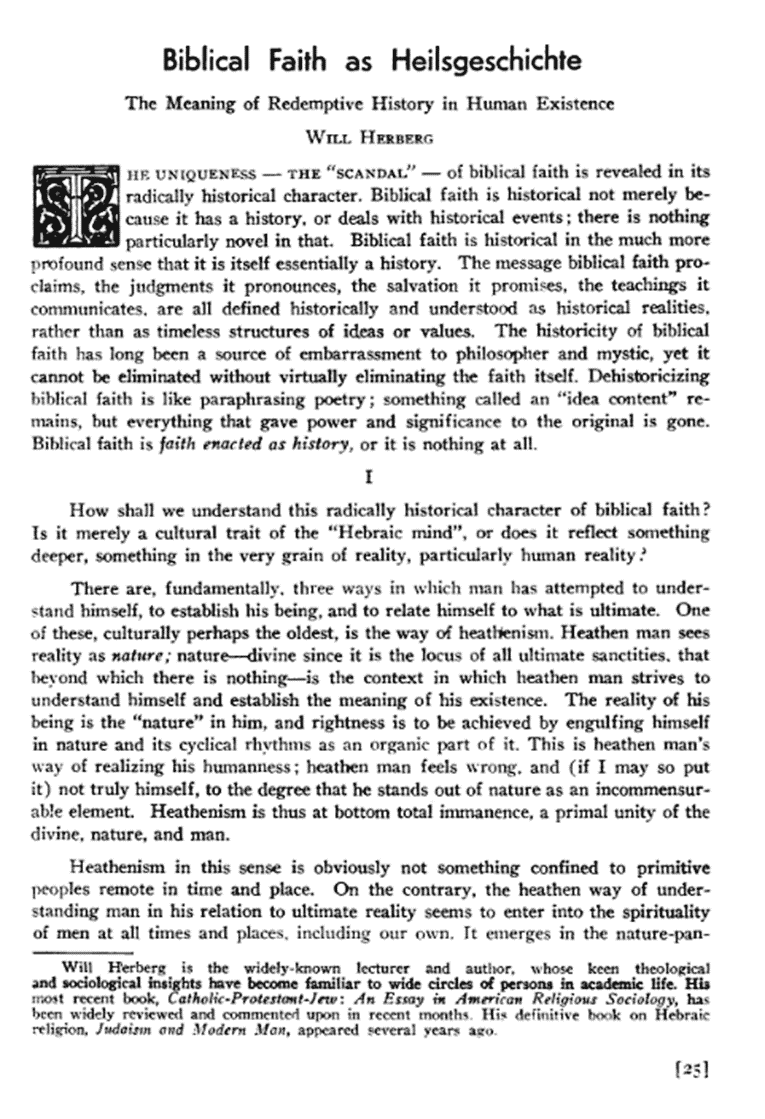 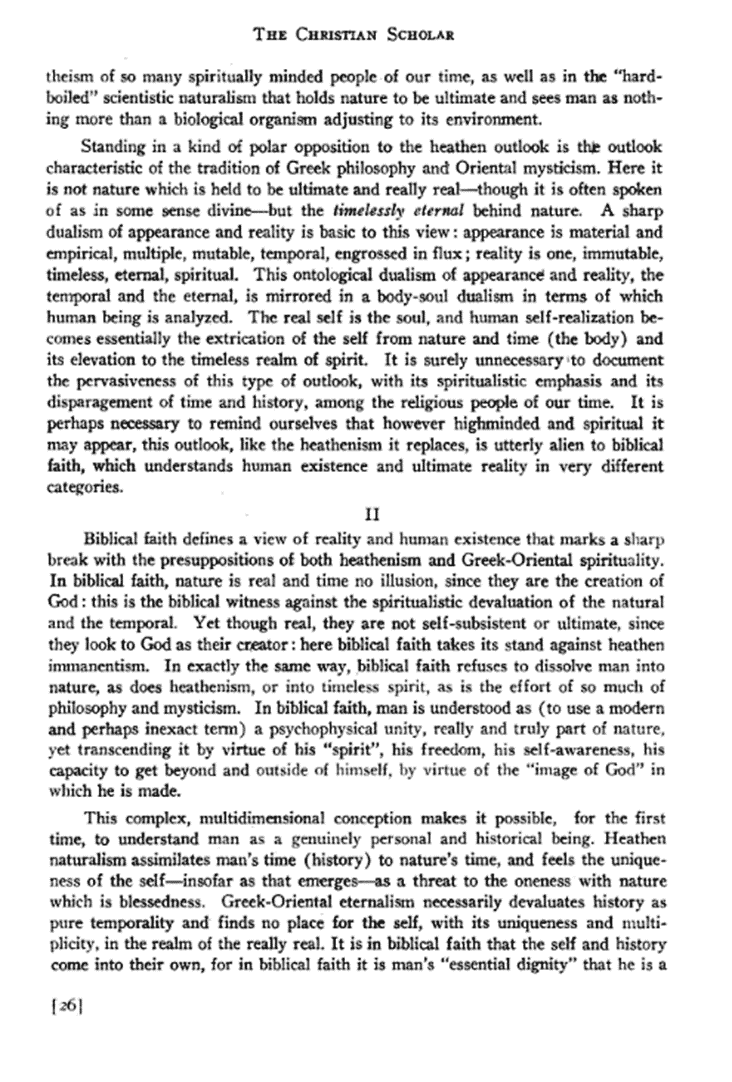 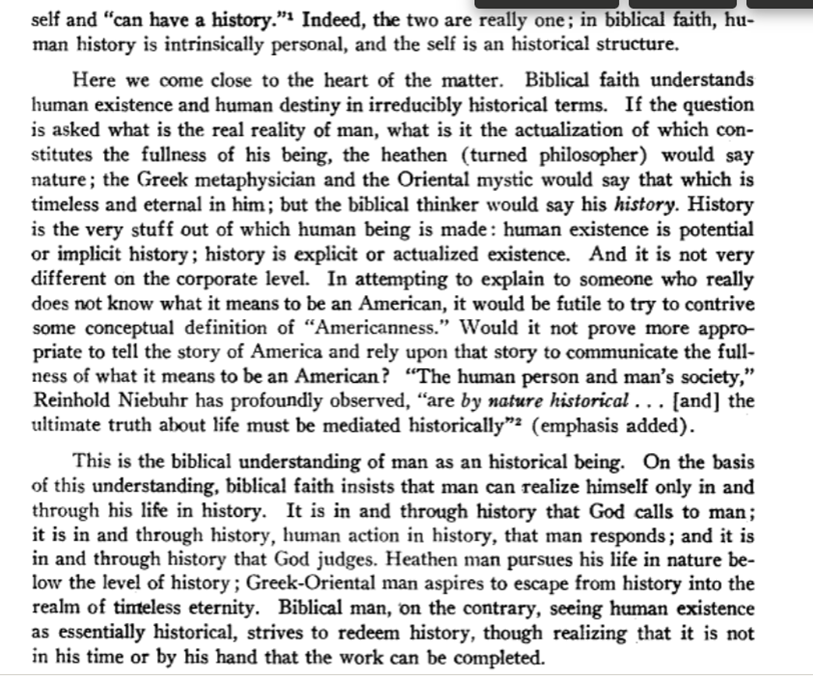