The many names of God

The many names of God

I open my discussion with a question of how many names Jews would normally carry: The Hebrew name, for religious services, the common local language name ( English, Persian, Arabic, etc), the common Jewish-language name( Yiddish or Ladino, such as Vulf for Zeev, Fortuna for Mazal), and then a nickname- Vulf becomes Velvel. To add to it, a slogan name, as was suggested-der Litvak- the Lithuanian, or der Shtarker- the Tough One.

Why is it that God tells Moses his name, in the opening of the portion of Vaera, even though he already heard it a few chapters before?

The question is ancient, made critical in modern times over a century ago by Julius Wellhausen.

Not original, but he gave it his most famous form. Key element- the choice of names of God-

J- Jawvist   - those traditions that used YHWH( formally termed Tetragrammaton-the Four-Letter Name)  in the Bible texts, from the Kingdom of Judea

E=Elohist - those traditions that used Elohim in the Bible texts, from the Kingdom of Israel

JE- A merger of the two documents, merging the two names together, YHWH Elohim.

It am not going into a critique or defense-Wellhausen has been dismissed as a theological anti-Semite, but many scholars think there is still merit to his approach.

But it gives rise to the question, as in Shakespeare Romeo and Juliet- “What ‘s in a Name? A rose by any other name would smell as sweet.”

But knowing names is critical to Biblical thought

The angel comes to Manoah and his wife to announce the birth of Samson:

So Manoah said to the angel of the LORD, “What is your name? We should like to honor you when your words come true.”

The angel said to him, “You must not ask for my name; it is unknowable!”(Judges 13)

The Power of Names in Classical Greek Religion

( This is a real burning bush shrub in fall foliage) 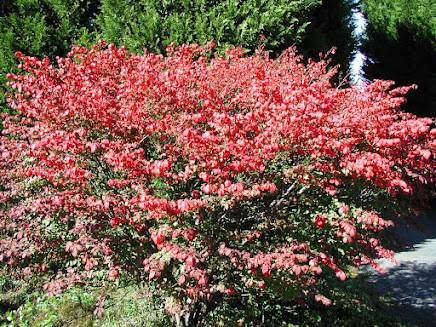 And [God] said, “I will be with you; that shall be your sign that it was I who sent you. And when you have freed the people from Egypt, you shall worship God at this mountain.”

Moses said to God, “When I come to the Israelites and say to them, ‘The God of your fathers’ [house] has sent me to you,’ and they ask me, ‘What is [God’s] name?’ what shall I say to them?”

And God said to Moses, “Ehyeh-Asher-Ehyeh, “Thus shall you say to the Israelites, ‘Ehyeh.” sent me to you.’”

God said further to Moses, “Thus shall you speak to the Israelites: ה”

the God of your fathers’ [house]—the God of Abraham, the God of Isaac, and the God of Jacob—has sent me to you:This shall be My name forever,This My appellation for all eternity.

Ehyeh- is an odd name-literally- I will be. It sound like an avoidance- I am what I am-I will be what I  will be.

(Taken from Talmud 9b)

Rashi’s instinct here is good. Ehyeh It indicates God as a presence with in the suffering people of Israel. Ehyeh is what God tells Moses a line before” Ehyeh” I will be with you. For that reason, he follows up with the YHWH and a definition: ה” the God of your fathers’ [house]—the God of Abraham, the God of Isaac, and the God of Jacob—has sent me to you:This shall be My name forever,This My appellation for all eternity. The historic . not abstract, connection.

Going back to the idea of naming names as a way of control- God’s name is very evasive, unclear, intentionally-there is no control over God by use of the name.

Moshe goes to Pharaoh the first time, with this name of God:

Afterward Moses and Aaron went and said to Pharaoh, “Thus says ה”, the God of Israel: Let My people go that they may celebrate a festival for Me in the wilderness.”

But Pharaoh said, “Who is ה” that I should heed him and let Israel go? I do not know ה”, nor will I let Israel go.”

Everything goes downhill from here, and Moses goes back to the desert to complain:

Then Moses returned to ה” and said, “O my lord, why did You bring harm upon this people? Why did You send me?

Ever since I came to Pharaoh to speak in Your name, he has dealt worse with this people; and still You have not delivered Your people.”

Now comes the news, which does not seem to be news:

I appeared to Abraham, Isaac, and Jacob as El Shaddai, but I did not make Myself known to them by My name ה”.

However, in Genesis, God often introduces Himself as “YHWH”, so what’s new?

In other words, they heard the name- but they did not understand what it meant! Keeping faith. Now, in your generation, you will see YHWH as the fulfillment of the promise. Again, tying in very well with the concept of “ Ehyeh”, being with.

So what is this YHWH- very similar to EHYH- variation on “ to be”.

He shall be- I shall be. A philosophical concept of being and becoming. Hu hayah- hu-hoveh- hu yihyeh-He was-is-will be.

Under the influence of the Canaanites, Baal often appeared in names, only to be removed, as Yerubaal , May Baal  contend, became Gideon,the one who cuts down Baal,,and Ishbaal , A man of Baal, Saul’s son became Ishboshet, a man of shame.

By the way, what happens when you reverse the names, Hananiah or Azaria. They are the Carthaginian Hannibal and Hasdrubaal.

Alternate approach, one which works well with Rashi’s choice of ”being with.” 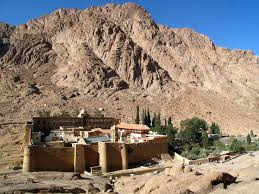 (Santa Katarina monastery, next to Jebel Musa. In the heart of Sinai. Midianites territory.)

In 1956, Shelomo Dov Goitein (1900-1985), a scholar of both Jewish and Arabic studies,[16] suggested that the name derives from the Arabic root h.w.y (هوى), and the word hawaya (هوايا), which means “love, affection, passion, desire.”[17] He connected this suggestion with the passage in Exodus 34, in a set of laws known by scholars as the Ritual Decalogue. One of the laws, which forbids Israel to worship other gods, reads:

Exod 34:14 For you must not worship any other god, because YHWH, whose name is Impassioned, is an impassioned God.

Goitein suggests that “YHWH whose name is Impassioned” refers to the deity’s personal name YHWH, which means “the Impassioned One,” and that this name derives from that (proto)Arabic term for passion. This reflects the idea that YHWH’s bond with his worshipers is one of passionate love, and YHWH is upset if the worshipers “cheat” by worshipping other gods.

In other words, the worshippers’ relationship with YHWH must be exclusive.

Again, as a corollary- God is unseen. When Moses asks to see God, he is given a rear view mirror .Ex 34:6

!ה”! ה” a God compassionate and gracious, slow to anger, abounding in kindness and faithfulness,

So , going back to Wellhausen- what is the argument against his claim that Elohim is northern, YHWH is southern?

The difference is , by many commentators, a matter of who is speaking to whom:

Elohim- El-Eloah-singular-Elohim-plural- is equivalent to the old antiquities term” The Gods”-generic. When is it used? When Hebrews speak to Gentiles:

Gen 20 Avimelech thinks Sarah is Abraham’s sister. Abraham says” There is no fear of Elohim.” Then Abraham prays to Elohim to make Avimelech’s wife fertile, “for YHVH had closed fast every womb of the household of Abimelech because of Sarah, the wife of Abraham.Note the switch in use of names.

And in the very next line:

My name is as I act in the world: With justice, then My name is Elohim. With Mercy, my name is YHWH.In war, then Tsevaot( the armies, the  hosts of heavens). In help, Shadai ( powerful).To you, Moses, I speak, directly, person to person, not in riddles and dreams.

Actually, we are told, there are multiple names for God in the Bible.

To this, the Rabbis added

Shekhinah, presence-The noun form of a verb used in the Torah to describe God’s in-dwelling in the midst of his people.

This enters Christian texts as well. What is called Shem Hamephorash in Hebrew sources becomes Semamphoras in European texts.

Reuchlin’s research on Hebrew sources was a factor in the Protestant Reformation, which ushered in age of Revolution, now going full circle. It goes from Moses and the liberation from Egypt to the liberation of the beginnings of modern history with the revolutions against the rule of Churches and Kings.

.Note: Bible text and translation from Sefaria.org.and modified as needed.

Posted by Rabbi Dr. Norbert Weinberg at 10:26 AM