Thoughts from my recent visit to Italy and Israel 2019

I.Florence- the Great Synagogue- and the Emancipation of the Jews

We forget too easily that Jews of Europe were the victims of the longest running system of servitude in history, dating back to the codes of the Roman Emperors, Theodosian and Justinian in the 400's. At best, they were, Servi camerae regis, servants of the royal chamber,thus defined by King Edward of England:

"All Jews, wherever in the realm they are, must be under the king's liege protection and guardianship, . . . because the Jews themselves and all their chattels are the king's. "
At best, kept in a gilded cage, at worst, beaten and expelled.

So it is significant that as we approached the Age of European Enlightenment and the revolutionary movements   that toppled the 'ancien regime' of kings, nobles and clergy, the gates were being opened for Jewish at the end of the 18th and beginning of the 19th century. The word used for this was " Emancipation", the same word used in regard to the serfs in Russia and the slaves in the US.

In northern Italy, Jews were given their " Emancipation' in 1848.

Within another 40 years, these Jews gave visible expression to their newfound rights and  prosperity.

They would build a synagogue that stood out on the skyline of the new capital of Italy, Florence, as a sign of their pride and presence. It would not be in the style of the basilica or the cathedrals ;they sought a distinctly Jewish expression. It would also indicate, to the Italians, and the Europeans, our sense that we were here yet always from elsewhere, not Europeans, but Jews of the Land of Israel; our rights included the right to be different.

"Throughout the Middle Ages and the Early Modern period, synagogues across Christian Europe were generally small, so as to be “invisible” or at least unrecognizable as houses of worship. . . .  also a result of the restrictions placed upon the Jewish populace by the government which required that they be inconspicuous ."( https://academic.oup.com/leobaeck/article/56/1/105/942304. )
(In Islam , also, any synagogue had to be  built lower than the mosque.)

" Florence is one of the few places in Europe where the synagogue is conspicuous, unlike in many European cities where it is difficult to distinguish the synagogue from other structures. This temple was built to be seen, to fit in with the architecture of the city, such as the Duomo or the Signoria. The Jews began to think about building a new synagogue for Florence just after they were freed from the ghetto in 1848. They wanted it to be a monument to their emancipation. After all their repression, the Jews created this temple to show their liberation at last. "
(https://www.jta.org/1982/12/27/archive/behind-the-headlines-the-jews-of-italy-2) 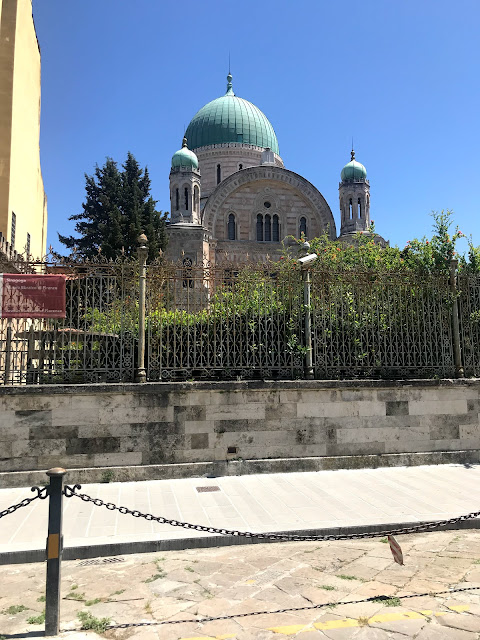 The Great Synagogue of Florence 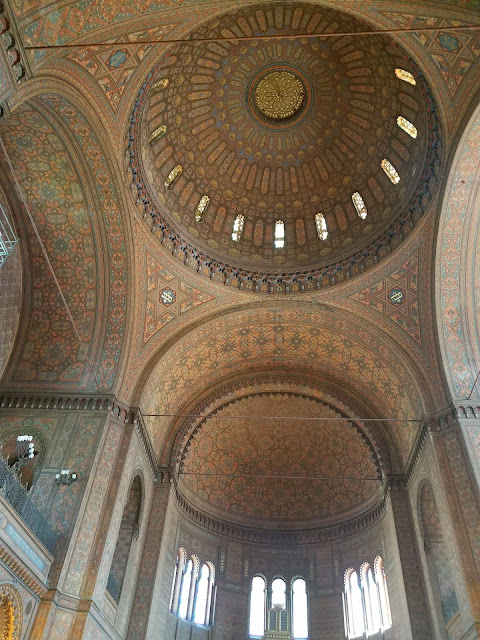 The Dome of the Florence Synagogue

"1882 -. The architects were Mariano Falcini, Professor Vincente Micheli, and Marco Treves, who was Jewish. Their design integrated the architectural Italian tradition with the Moorish style used for the decoration. This style was once considered fit for a Synagogue because it was never used for churches and, in the case of the new Synagogue of Florence, because it was built in the Sefardic style. This was considered fit because it would remind Jews of the origins of Sefardic Jewry in Berber Moorish Spain .

Why this fascination with Moorish Spain?

By the mid-19th century, the style was adopted by the Ashkenazim of Central and Eastern Europe, who associated Moorish and Mudéjar architectural forms with the golden age of Jewry in Al-Andalus. As a consequence, Moorish Revival spread around the globe as a preferred style of synagogue architecture, although Moorish architecture is by no means Jewish, either in fact or in feeling. .

Moorish style, when adapted by the Ashkenazi was believed to have been a reference to the Golden Age of Spanish Jewry, it was not the primary intention of the Jews and architects who chose to build in the Moorish style. Rather, the choice to use the Moorish style was reflective of pride in their Semitic or oriental heritage. This pride in their heritage and understanding of Jews as "semitic" or "oriental" led architects like Gottfried Semper (Semper Synagogue Dresden, Germany) and Ludwig Förster (Tempelgasse or Leopoldstädter Tempel, Vienna, Austria and Dohány Street Synagogue, Budapest, Hungary) to build their synagogues in the Moorish style. Moorish Style remained a popular choice for synagogues throughout the rest of the 19th and early 20th century

The overall plan of the synagogue is quadrangular. The central dome raised on pendentives is reminiscent of the Hagia Sophia and many mosques inspired by it. The corner towers are topped with horseshoe-arched towers themselves topped with onion domes in the Moorish Revival style. Three horseshoe arches form the main entrance, above which rise tiers of ajimez windows, with their paired horseshoe arches sharing a single column.[1] The natural copper roof was oxidized to green so that it would stand out in the Florentine skyline.. "
(https://en.wikipedia.org/wiki/Synagogue_architecture )

Here are some other examples of Jews expressing themselves in architecture:

This is the Westend Synagogue on Freiherr von Stein Strasse, Frankfurt Am Main Germany. This was the synagogue at which my  father served after the Shoah. It was  was an art nouveau building with Assyrian and Egyptian influences,built in 1910.No one could have been more German than the " Yekkes" of Frankfurt, yet the message of the building was a very clear one: we are the same, but we are other.
It is also reminiscent of another ancient structure you will see below. 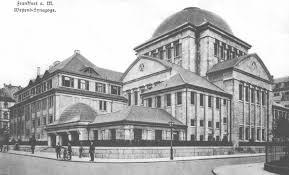 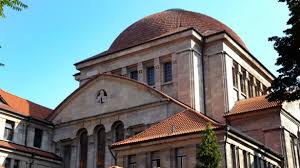 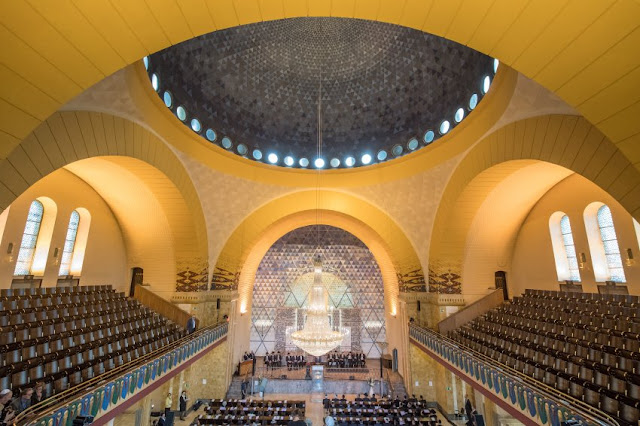 The synagogue had been spared the ravages of Kristallnacht and the Allied bombings during WWII.

Here is a page from a magazine article on the dedication of the synagogue under leadership of my father,First State of Hesse of Hesse, Germany 1951,Rabbi William( Wilhelm) Weinberg. 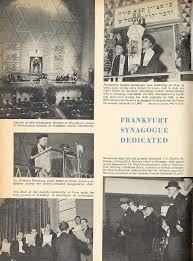 Here in Los Angeles, we have our own expressions of Jewish pride.

I was at the nursery school graduation of our grandson a few weeks ago, held at the Wilshire Blvd Temple. I took a look up to the top of the enormous dome. 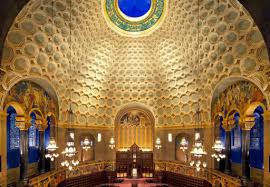 It was modelled after after Rome's Pantheon. in Byzantine style and stands at 100 feet in diameter with its top 135 feet from the street .

Note the similarity outside with the Frankfurt synagogue as well.

What better way for Jews to say" We are here" than to copy the style of our enemies, the Romans, who disappeared, while we remained. It was also a statement to the LA establishment ( the Chandler family of LA Times fame) that we were a social and political force to be reckoned with.

Which brings me to our own magnificent structure, Hollywood Temple Beth El , built in 1952.

While it is not as cavernous as the Wilshire Temple, and we don't know what the architect, Harry Hiller, had in mind, we can guess what inspired this design when we look at the picture below:.

An artists rendition, found in a Freemason's website, of the First Temple in Jerusalem. Clearly, we have a Temple inspired by The Temple. 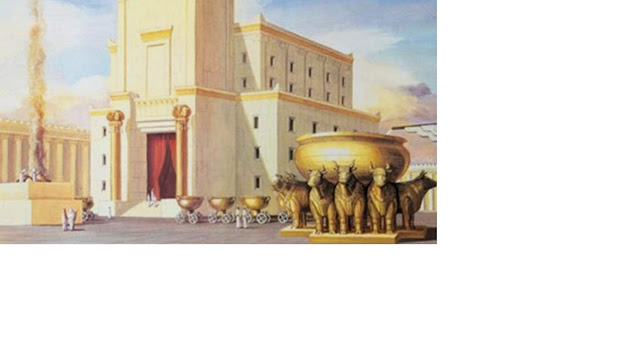 A popular depiction of the Temple found in http://freemasoninformation.com/2016/04/king-solomons-temple-as-a-symbol-to-freemasonry/

What better way for the synagogue founded by some of Hollywood's founding film magnates to say " We are here", than to invoke the spirit of the first Temple in Jerusalem, transplanted to Hollywood.

Sadly, in Europe, that burst of Jewish exuberance was short lived, snuffed out by Fascist racism in western Europe and the absolutism of the proletariat in eastern Europe. Today, as I write, Jews are again afraid to walk the streets wearing some form of visible Jewish identity, intimidated by the far right, the far left, and Islamic fundamentalists.

We can not allow that to happen here!

We were at a concert of Hiba ( the Israel Heritage Movement) with the Sephardic Music Ensemble of Western and Middle Eastern Instruments. 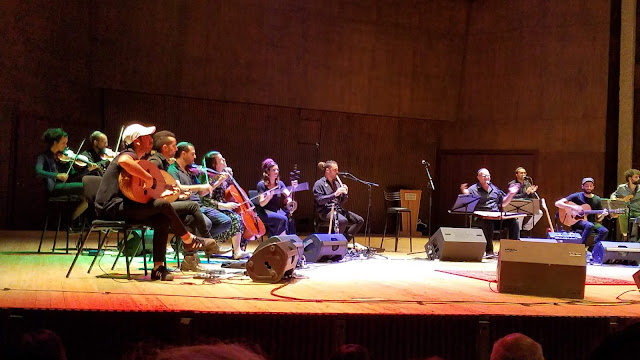 
David D'Or,  with 4 octave range. I have never heard a female soprano sing as high as this male singer. David D' Or is of Libyan Jewish heritage.  He performed a mix of Italian operatic style, by Andrea Boccilli with classic Egyptian Arabic music of Uum Kultum( Ente omre).He and the orchestra weave back and forth seamlessly, between the two genres, even though they are structered in what is essentially two different muisc planets- the western eight note scale and the middle eastern Makam scale. 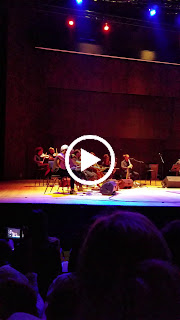 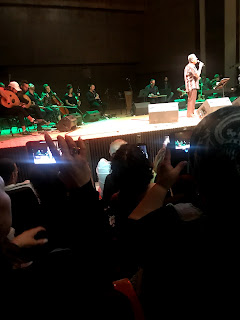 Why is this signifcant?

The opposition to cultural appropriation is supposedly a progressive " woke" issue. It refers to using elements of another culture , not with the intent of humiliation or oppression, but a matter of taking what belongs to another, as if borrowing music were the same as stealing land.

It is, in its origins, a fascist concept, best formulated by the great philosopher of history,
Oswald Spengler, who posited that there are unbridgeable barriers between civilizations. He was taken to task by my father, recently released from Nazi prison, in 1937, in his essay on "Mut zum geist"",a critique of modern intellectual trends of his day." (http://www.courageofspirit.com/2012/04/1st-emergence-from-hell-scholar-lays.html)

"Spengler does not recognize "mankind". There are only isolated cultures: between which there can be no concept which can provide a bridge of understanding. The members of one cultural circle can never comprehend the members of another cultural circle. Mankind as a whole has no unifying idea, no plan, no goal, no evolution."

The main accusation by Richard Wagner and the likes was that the Jew can not possibly understand the sole of German civilization and therefore, the Jew can not create, he can only imitate, like a technician, not an artist.

The cultural creativity taking place in Israel is a slap in the face of Wagner.

The complaint of "cultural appropriation" is part of what theoreticians of political science identify  as "left-wing fascism", first labelled as a phenomenon of the 60's and 70's radical movements and still popping up today on US campuses and the British Labour Party, for example. 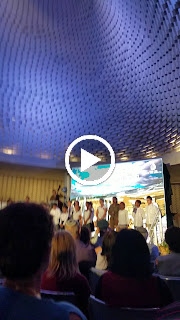 And then, there is the modern , fun type of cultural mashup:
After-dark partying at Mahane Yehudah, Jerusalem 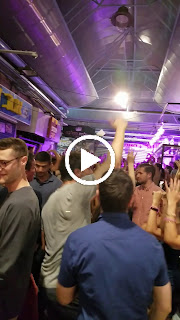 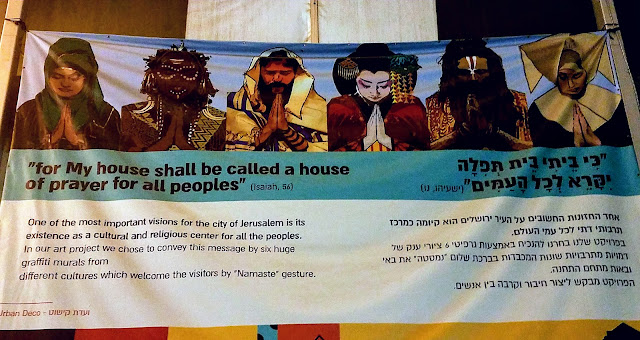 Banner at the Old Train Station, Jerusalem -with the quote from Isaiah," My House Shall be a House of Prayer for all Nations". 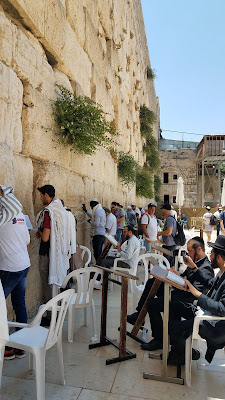 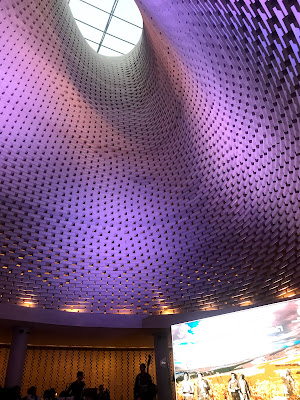 The Dome of the Memorial for Israel's Fallen Defenders, Mt Herzl

Reflection on the theme of Domes-The bricks are inscribed with the names of Israel's defenders.Reminscent of adjacent Yad Vashem Hall of Names. 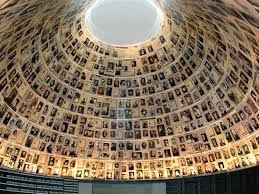