Judaism on One Leg: What is Adam/Human Part 2

For a link to the video discussion:

Some More on Male /Female

Again, go back to my earlier discussion: We can’t understand Adam and Eve without understanding the pagans.

The image of woman in Judaism can only be understood in the context of the attitude of ancient societies, especially in the Middle East, towards women. This, in turn, is rooted in the philosophy of the world.

Forget the myth of the original matriarchal society in which women ruled fairly and justly. It is just that- a myth.

The ancient gods were humans expanded and writ large- male and female, bound up in sex, heterosexual, transsexual, transspecies, anything and everything was seen in this binary of the universe.

From this perspective, we see how males, in writing their interpretations of the world, look at females.

Go back to these Greeks, and how the gods punish man by creating Pandora:

…and golden Aphrodite to shed grace upon her head and cruel longing and cares that weary the limbs. And he charged Hermes the guide, the Slayer of Argus, to put in her a shameless mind and a deceitful nature.  .. For ere this the tribes of men lived on earth remote and free from ills and hard toil and heavy sickness... But the woman took off the great lid of the jar with her hands and scattered all these and her thought caused sorrow and mischief to men.

How women were created by the Grandsire Brahman . . .There is no creature more sinful, O son, than women. Woman is a blazing fire. …She is the sharp edge of the razor. She is poison. She is a snake. She is fire. She is, verily, all these united together

The puissant Grand sire( Brahama) having ascertained what was in the hearts of the deities, created women. . .  Those, however, that sprang from this creation by Brahman with the aid of an illusion became sinful. The grandsire bestowed upon them the desire of enjoyment, all kinds of carnal pleasure. Tempted by the desire of enjoyment, they began to pursue persons of the other sex. The puissant lord of the deities created Wrath as the companion of Lust. Persons of the male sex, yielding to the power of Lust and Wrath, sought the companionship of women… they are living lies.

As for our neighbors, and closest relatives, the Canaanites:

Ancient Semitic female deities were just tough: Here is Anath ( a name that appears in the Bible “ Shamgar ben Anath”, a great hero like Samson. She appears in Egypt, in the Jewish settlement of Elephantine, as the consort of God!

Don’t mess with her: Tale of Aqhat 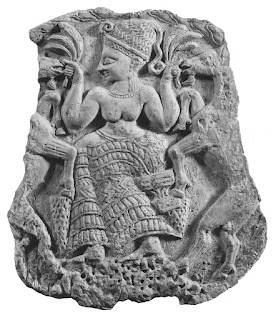 This image is identified as " Asherah", Anath's counterpart in the Canaanite Myrths.  Look at the skulls

The Bible’s Israelite/Hebrew women are all righteous, but the men- not so. On the other hand, the trouble makers are pagans- but some of the saints are also!

( Admittedly, Amos is upset at the wives of the wealthy, “Parot HaBashan, Cows of the Bashan ( over-fed) who oppress the poor and destroy the needy, and Ezekiel complains about the women who mourn the pagan Tammuz, but that’s the exception).

Understand it is not our concept of equality- can’t read 21st century concepts into the past-but we can extrapolate from past principles to the future:

2)   Men and women jointly bound in the covenant at Sinai

3)   Civil and criminal laws apply to both, with an understanding that the male has the economic poser and with it, the economic obligation.

5)   From Proverbs -image of wisdom as female, as the first creation, mother as source of Torah and teaching, just as father is. Eshet Chayil- woman as provider and strength of household.

In Rabbinic thought, contrary to Christian, sex is not the original sin. It precedes it:

Rabbi Yoḥanan bar Ḥanina says: Daytime is twelve hours long, and the day Adam the first man was created was divided as follows: …. In the seventh, Eve was paired with him. In the eighth, they arose to the bed two, and descended four, i.e., Cain and Abel were immediately born. In the ninth, he was commanded not to eat of the Tree of Knowledge. In the tenth, he sinned. …(Sanhedrin 38b)

Unity of all humanity:

Greek- after the flood- the equivalent to Noah and his wife throw stones over their backs as they walk, and humans are created out of the individual stones—no inherent relation from stone to stone. Thessalian Greek origin myth—they are created out of ants to be fierce warriors.

Rabbinic dictate on commonality and uniqueness of each human being

[in some texts, which may be older, it does not have “ from Israel”. The admonition here is because the court had the right to judge only Jews, not non-Jews ( prerogative of the Roman government), hence specifying Israel.]

Again [but a single person was created] for the sake of peace among humankind, that one should not say to another, “My father was greater than your father”.

Again, [but a single person was created] against the heretics so they should not say, “There are many ruling powers in heaven”.

Again [but a single person was created] to proclaim the greatness of the Holy Blessed One; for humans stamp many coins with one seal and they are all like one another; but the King of kings, the Holy Blessed One, has stamped every human with the seal of the first man, yet not one of them are like another.

Therefore everyone must say, “For my sake was the world created.”

Text in Quran: Following story of Cain & Abel, which reflects a Rabbinic midrash:

Commentary of the Meiri on Sanhendrin 47

Even on idolatry, we do not forcibly stop them:

The Gemara asks: But don’t we see that there are? The Gemara answers: Say the majority of the people of the nations of the world are not heretics, and with regard to slaughter[referring to shechitah=who may be a shchet] one follows the majority. The Gemara notes: Rabba bar Avuh holds in accordance with that which Rabbi Ḥiyya bar Abba says that Rabbi Yoḥanan says: The status of gentiles outside of Eretz Yisrael is not that of idol worshippers, as their worship is not motivated by faith and devotion. Rather, it is a traditional custom of their ancestors that was transmitted to them.

Nature of the Human Being:

An old teacher of mine told me his father’s explanation of Jacob’s ladder: Sulam mutzvav artza- The ladder is stuck in the ground, but rosho magai hasmayma- The head reaches up to the heavens.

“ yester hatov”- the good inclination, and “ Yezter hara” sitting on each shoulder, with the self in the middle.

The concept of freedom of choice: God to Cain, when he is upset: Chet rovetzet tachat

If you do well, shalt you not be accepted? and if you do not well, sin crouches at the door, and to you shall be its desire. Yet you may/will rule over him.

Everything is foreseen yet freedom of choice is granted, And the world is judged with goodness; And everything is in accordance with the preponderance of works.

Kabbalistic concept- the human being, as manifested in the Jew, is responsible to bring redemption by tikkun, by raising the Nitzotzot Hakosh- the sparks of holiness, that are buried in the physicality of the universe. Each mitzvah raises that redeems that spark and returns it to God. This is the concept of the human being created for a higher purpose.