Link to the video

The first time God confronts Adam when he is in trouble, he starts with a question: אַיֶּֽכָּה. Where are you?

When Cain is disappointed

Where is Abel your brother?

And the most atrocious hutzpah in history

Am I my brother’s keeper

To which the answer is another question

What did you do??

From hence forward, we will always be asking questions.

The foundation of classic Judaism is the Mishnah- It is our basis, as I mentioned for all Jewish practice for the next 1800 years.

It does not tell us what to do. Instead it too opens:

When do we begin to recite the Shma in the evening?

You don’t have to tell me what I know, ask me what I don’t know.

And then, I get two distinct answers.

“From what time may one recite the Shema in the evening? From the time that the priests enter [their houses] in order to eat their terumah until the end of the first watch, the words of Rabbi Eliezer. The sages say: until midnight. Rabban Gamaliel says: until the first ray of light.( Mishnah Berakhot 1:1)

It is the concept of Torah she B al peh, a teaching that is transmitted orally over the generations from teacher to student that is the uniqueness of Judaism beyond the text of the Bible. It was so radical in its day that the Roman Empire was afraid that the oral teachings not the written Bible was the great danger to the Roman Empire. Thus when it comes to the period of the rebellion of Bar Kochba, the Romans permitted the reading of the Bible but forbade its teachings and interpretation. Using the term “Deuterosis”.

Where does it start ?

We can presume that even in the period of the first temple as the texts that would make up the Bible are being gathered that there are schools that are enlarging upon the written word. We have terms like been Bnay Neviim, the sons of the prophets which may indicate students that gathered around a particular Tzadik or holy man and recorded his teachings and transmitted them to others. Certainly when the children of Israel return to the land of Israel and the and scribe Ezra institutes formal public reading of the Torah, he adds to it the translation into the common language of the folk Aramaic and with translation, there's also explanation. That ancient practice, of reading line by line, Hebrew and Aramaic, continues till modern times among Jews of Yemen. Given to a child of pre-school age!

We have the development of customs and practices that flesh out be very skimpy words of the Torah.

For example on Shabbat we have very few descriptions of what is permitted and what is forbidden in terms of work. Practice is being developed during this.

One example in case is the question of self defense

Shabbat during the time of the persecution of the religious Jews by Antiochus and his henchman. The very pious would rather die than the defend themselves on Shabbat and the Maccabees introduce the principal that saving of life and self defense was essential to preserve the Shabbat.

Other rules of Shabbat:The Torah says: Do not go out!

Does that really mean stay in doors?

The Torah says: You shall not have fire burning on Shabbat.

Does that mean sit in the dark?

So we have practices- such as lighting fire before Shabbat, lighting Hanukah lights, reading the megillah- that catch on, and they need to be justified, in a basis in the written Torah.

Hence, the need for scholars who can make the connection between the text and the practice.

We have the rise of schools of scholars, the Pairs, zugot, as recorded in Pirke Avot. The most famous, just at the time of Julius Ceasar, would be Hillel and Shammai.

The earliest teachers have no formal title, after Hillel, we have title “ Rabbi” or Rabban” My or our teacher, Master.

Authority is taken away from Prophets ( prophecy is  realm of children and the insane) and authority is moved from the text to the interpreter, even over the voice of Heaven.

Now, development of 3-not 2 lines of study- Saduccees- the Priests- close to the text, emphasizing their role; a strict constructionist approach, Shammai, and a lose-liberal construction, Hillel. Jesus , in Christian Scriptures, is in conflict with both schools,   battles most with Pharisees- because his practices and his theology are probably closer.

Washing of hands before meals, picking clusters of wheat grain while walking through a field on Shabbat, healing ill on Shabbat(  issues mentioned in name of Jesus for example) Just as Communists fought more against Socialist than with Fascists.

Also, this period gives rise to new theology- techiat hametim-resurrection of the dead-olam haba- the next life-These are concepts rejected by the Saducees and the Temple priestly class --yemot hamshiach. Political- or end of all existence?

For example, Rabbi Ishmael- uses of rules of logical analysis ( 13 midot)- versus Rabbi Akiba, using unusual phrases or terms as an opening to drive a truck through ( achin v atin).

Creation of early compendia_ Mikhilta, Sifra, Sifrei- Discussions based around the texts of the Torah.

Finally, c 200,Rabbi Judah Ha Nasi( Prince) is powerful and connected to the Roman Emperor, so has the clout to create a formal compendium,The Mishnah( a play on the term for Devarim, Mishneh torah- a reteaching of the Torah. Now , rules organized around core themes -Seder- Order Agriculure; Festivals; Women; Damages; Sanctity( Sacrifices); Purity. These are then divided according to topics= Masechet=Tractate.Such as Shabbat or Courts(Sanhedrin).

Again, all goes in pairs.

Then , there is a school of Rabbinic statements that is not Mishnah—the Tosefta

No sooner is the is the ink dry than new issues arise!

Jews in Land of Israel have their needs, Jews in Babylonia, have more wealth and again, different needs.

Also the work of pairs, Rav and Shmuel, Abbay v Rava, and competing academies- Sura & Pumbeditha. Eventually, the Bavli becomes the authoritative text. New legal figure” Rav”- one who may teach the laws but can not render rulings on sacrificial animals( long since gone) as that is reserved only for the “amoraim: ( teachers of Eretz Yisrael). The text work and final editing by “ Savoraim”-reasoners.

No sooner  is the ink dry, and new issues arise! 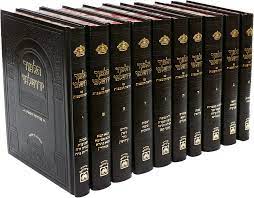 What is our prayer, for example. The ground rules are in the Mishna, fleshed out in the gemara( the teachings). So we have our first formal text of the siddur, of Rav Amram Gaon for Sephardim. Later, Mahzor Vitry for Ashkenazim.

Gaon- the glory, title now given to the head of the academies, as contrasted with Resh Galuta- Exilarch, head of the exile.

New questions arise- there are different conditions and issues under Christian , contrasted with Zoroastrian or Moslem rulers. The questions give rise to answers- Sh’elot u  Tshuvot.Responsa.

What are our beliefs? The Talmudic discussions are mostly around practice, but we have compendium of  Rabbinic sermons, creating legends, tales, popular sermons, built around the Parshat Hashavuah or other books of the Bible.  Midrash Aggadah- as opposed to MIdrash Halakhah,

We have formalized philosophy, in line with Greek thought, Saadiah Gaon, Rambam. There is also mystical speculation, breaking away form the plain text, filled with flights of the imagination, Zohar.

We need to once again comprehend our Torah, especially as we advance, in the early middle ages, deeper in to Christian France and Germany and Moslem Spain.Torah commentaries- Rashi, ibn Ezra, Ramban.

The Jewish world now extends from Gibraltar all the way to China- we have so much texts and literature- we now need new compendia, to organize our practice. Alfasi, Rabbenu Asher, Tur, Shulkhan Arukh( The Table is set) and the Mapah (the table cloth) because we have two parallel sets of practice- Sefardi and Ashenazi.

And so on to our times

Judaism, especially Pharisaic Judaism, is an elitist movement that sought to lift up the masses to the elites instead of looking down on the elites.

The rabbis looked at the Torah and saw in it the mandate to teach each generation:

rom the repetition of the word v’higadta and you shall tell, they derived the need to turn the Passover sacrifice into a teaching moment both for children and adults..

From the phrase in the Shma that says v shinantem, they understood the need to establish as broad and education system as possible. That system had its roots before the fall of the second temple and communities were obliged to create schools . These were schools for the study of values, not for professional degree but it is clear that in the process it created a public that could read analyze and think.  Therefore, the child studied rules of title to property, rules of fair exchange of coinage, rules of weights and measures, rules of proper legal rights and obligations.

Shakla vetarya- give and take-

This would not be a religion for people looking for pat answers or simple slogans. The wealthy elites who were not learned were looked down upon as Am Haaretz, ignoramus . the poor who gathered their pennies together to attend the academies , now the honorees. No such concept of a pious fool which medieval Christianity would develop. And that is because pure faith was central to Christianity whereas a reasoned faith and behavior based on learning was central to Judaism.

Thus the Jewish boy was raised ( also, in many cases, the Jewish girl) who was literate as well, compared to her non Jewish contemporaries(and there were women as heads of yeshivah, Hasidic groups- always an exception)

At 3 , sent to cheder, given a blackboard”open verses of Leviticus” covered with honey- given to lick- Torah is as sweet as honey.

Teaching the lesson the 400th time

Pirke Avoth reports the ancient education schedule-at 5, mikrah- learning the basic texts of Torah( after learning reading before that)

At 10, to the study of Mishnah- the essential Jewish observances then at 13, to carry out. Level of concrete thinking.

At 15, to study of Talmud-when the mind is ripe for conceptual and analytic thinking.

The ideal match for the daughter of the wealthy “ tovei hair” or the “parnas”, the leader, would be the “ Talmid Chacham”, the illui of the yeshiva.

Based on the Midrash that the tribe of Zebulun engaged in business and supported Issachar, who engaged in study.

No wonder that Khruschev, the head of the Soviets in 1950’s complained: