Judaism on One Leg:A God who asks questions: Where are you?

Lesson Three- What do we believe?

Only after we have started with the People and the Torah can we then get to what we believe.

A God who asks questions: Where are you?

Religion, in Jewish thought, did not begin with Moses, nor even with Eve, Cain, Noah.

Chanoch, Enoch, is seen as one “ who walks with God” in the generations before Noah.

There are academies of Torah study, in rabbinic tradition, headed by Shem ( Semite) and Ever( Hebrew), the ancestors of Abraham. Even prophecy, the Rabbis declared was not limited to Jews/Israelites, but Balaam was proof that God spoke to all people. Job was an example of a righteous person, though clearly not an Israelite.

What we have as unique is the sense that we have encountered God as a people, rather than as individuals. That is our uniqueness, and all else derives from it.

In the Torah, we have a sense of who  God is not. We are not commanded to believe in God, since that is a given of human experience.

In the beginning, Bereshit, --makes the presumption that we know there is a God- now, we are told “ Whatabout it”.

We have the introduction of a God who creates, in an orderly fashion, establishes the universe and what exists in a systematic, non-chaotic order.That’s chapter one. Then we have chapter two-three- four—that introduces us to a sense of God who “ walks in the Garden” as the One who is in deep pain because of our choices.

Absent from the Jewish God is the endowment of physical human characteristics—they may have been there in earlier levels, but gradually removed—and the absence of sexuality from God- Again, there may have been, in ancient Israel, a tradition of a consort, but that is removed.

So God no longer has human endowments- but  in reverse,  the very flawed and failing human, is now endowed with divine attributes, of wisdom, creativity, and the power to choose between good and evil. Hence , the Garden of Eden is closed- precisely because we have eaten of the ability to discern good from evil, and as a consequence, have the power to choose evil.

Beautiful midrash—there us a parade of Roman soldiers and they are leading a sacred object- and shout” make way for the image of the gods of Rome.

Response: “Rabbi Joshua ben Levi said: ‘A procession of angels passes before each person, and the heralds go before them, saying, “Make way for the image of God!”’ (Deut. Rab., 4:4)

Introduce God as source of Justice ,God knows that Abraham will teach his descendants to carry out God’s path, of Tzedek u mishpat—so Abraham rides up to the challenge at Sodom- Hashofet Kol Haaretz”( Gen 18)

God as the player in human history- Joseph accepts his brothers because he knows it was God’s plan to save many lives.(Gen 50). This theme universalized by Amos 9

You are the like Ethiopians to me. Behold, I brought out Israel form Egypt, just as I brought out the Philistines from Caphtor and the Arameans from KIr

Our knowledge of God is taken away from the physical: Moses wants to see God. No one can see God, but only discern the consequence, in reference to human behavior-Moses at the Golden Calf- Adonai Adonai= God as merciful and forgiving.

It can be translated: Adonay is our God, Adonay is alone- not to be identified with any other god,

Adonay- is the sole one, not to be worshipped together with any other god.

Adonay- is unique- that which is completely other, different than any entity, object, power, force.

Adonay- is the only God  that exists- all others are false, mythology, vanity, the fabrication of their human makers.

Adonay- now, in our translation- One- a unity.

These are essential to separate ourselves from the pagan concept, of multiple forces, multiple values, in the universe.

Then, we need to separate ourselves from the newly emergent philosophy of Zoroastrianism, the religion of the very people who save us from exile, the Persians: the universe as a conflict between good and evil, light and dark, with the belief that good will prevail. That duality will affect Jewish thinking in centuries later, but Isaiah will not have of it:

Who fashions light and creates darkness, makes peace and creates evil. I ,Adonay, do all of this!

We would now have the concept of a God who is above and behind all the contradictions of existence, the underlying unity of all existence, transcendent, yet, in Jewish thought, at once, immanent-directly felt and present.

That statement is adapted by the Rabbis as one of the opening concepts of the morning worship: The stark harshness is modified:

. “Blessed art thou, O Lord our God, King of the Universe, who forms light and creates darkness, who makes peace and creates all things.” ( u vorey et hakol)

This is the God who not only created, past tense, but, again, in the morning prayer, mehadesh bechol yom tamid maaseh bereshit—who renews the creation daily. ( Causa in esse, Causa in fieri, the cause of existence, the cause of continuation), in medieval philosophy

This idea of a transcendant God, beyond  all that exists, yet, immanent, one whose presence is directly felt, is imbedded in the structure of our worship, the core of the prayers: Barukh atah- it is an intentional contradiction:

Blessed are You- personal- then shifts to 3rd person, after addressing God personally—Adonay, Hamotzi—the bringer of bread, Asher kidshanu- who sanctified us.

( like modern English, Biblical Hebrew does not have the formal “ You” of other European languages-“Tu-Usted” “Tu-Vous” Du-Sie.) Later, Martin Buber would play on this, and speak of “ Ich-Du” I -Thou( old English-you, close and caring).Heschel would expand the term to “We-Thou”.

Do we have a systematic theology?

We have had two distinct ways of thinking—when it came to action, we had methods of analysis and of ordering our formal collective behavior. However, when it came to belief, we relied more on metaphors, literary phrases, poetic terms.

How do we come to belief, for example:

For our sages, it came out of experience- personal and collective

As for definitions- best by verbal, not physical. Images:

“k’b’yachol”—as if we could describe-this is what we would say:

Song of Songs Rabbah 1:9 On the comparison of the hero to a horse and Rabbi Akiba’s interpretation on the Song of the Sea:

‘Pharaoh mounted a stallion, and the Holy One blessed be He, as it were, revealed Himself on a stallion.

God as “ Shekhina” – the presence, begalut- that is in exile.

Makom- The world is not God’s place, but God is the world’s place.Ber Rabbah 68

The Greeks did  much better job  of organized reason, and while some of it may have influence Jewish thinking in our first encounters, by the time of our 2nd encounter, Greek thought through Islam, we were open to this kind of systematization.

The prime example- Philo of Alexandria, in our first encounter, who applies the Greek method of turning all ancient texts into metaphors for philosophical concepts. (Actually influences early Christianity more than Jewish thought)

Most famous- and most controversial- Rabbi Moses ben Maimon- Rambam

,turns Aristotle into a Jewish thinker ( almost).  Asides from his very cryptic Guide for the Perplexed, intended for only a choice few students), he created a philosophical foundation for the common man in his Mishneh Torah= the only work of Jewish law that starts with the issue of belief.

In Rambam, there is only the negative attribute: We can only know what God is Not- if we say a word about God, such as, good- it can only mean Good in a sense that no human can comprehend: Maimonides writes in Chapter 50 of the Guide, “Those who believe that God is One and that He has many attributes declare the Unity with their lips and assume the plurality in their thoughts.”

For the philosopher, there is need of proofs:

The first mover- on the premise that you can not have an infinite chain of causes( which Rambam himself claims he could solve), there must be the first, unmoved mover, to start all motion.

There is a very neat medieval proof of God, St Anselm:  God is “that than which a greater cannot be thought”- since to exist is greater than not to exist, therefore God exists. It’s very neat, compact, completely self-fulfilling. Does it beat the intuition of the existence of God that permeates all of Torah? As the medieval stated it, Philosophy is the handmaiden of theology.” It’s nice company, but it can’t beat the real thing.

Finally, there is a Kabbalistic attempt at understanding God, as an unfolding from the Ein Sof-Infinite- or “ Ein- No Thing- through the aspects of Chochma-Binah-Daat=wisdom, understanding and knowledge, through the Sefirot- ( Number-also sphere) through the Yesod-foundation-into Malkhut- the feminine- on to creation:

God as a flow chart 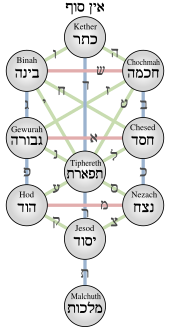 PS- the Kabbalistic word for the emanation of God through the Sefirot and down to the created world is "Shefa", a flow.

Or as the form of Adam Kadmon-the primordial human