Other approaches to modernity-

hand -in-hand, yet sometimes disconnected from religious Judaism of any kind

A)   Total absorption into the dominant culture- a Jew is a German of Mosaic Persuasion, or a Russian of Mosaic persuasion.

It is great when everyone is singing With the French:Les Marsailles

But what happens when that international camaraderie fails and is replaced by the Romantic reaction,

Cold reason is replaced by the warmth of feeling and will. A fear of science sets in -Frankenstein.

And  now, instead of the “brotherhood of all humanity” or the ideal of
Europe”—there is an exploration  of  notions of “ der volk” or “ “ narodny” or “plain old folks”. On the beautiful side, peasant songs become the source of great music.

Now, where are we Jews when Germans think of Germans, and Russians of Russians or French of French?

Think of the reaction of the new  Pharaoh who ascends to the throne after Joseph’s death, as he sees Jews prosper in his land:

What happens when the anthems are replaced by the luscious operas of Wagner, with their tempestuous melodies and the story of the evil dwarves in the Ring of the Nibelung-  you know who the dwarves represent.

Richard Wagner writes of "the Jew" that he is "incapable ... of artistic expression, neither through his outer appearance, nor through his language and least of all through his singing." Instead, Wagner believed Jews could only "imitate art." 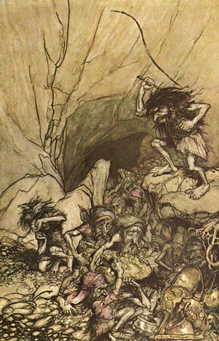 This narrow perspective of the nation was especially pronounced in eastern Europe, under the auspices of a Russian Tsarist regime that didn’t know what to do with the vast number of Jews they inherited when they conquered parts of Poland and the Ukraine.

So, we now have new Jewish responses, in addition to the formal religious perspectives –we are now rediscovering ourselves as a people. This takes place well before the start of Zionism.

It starts with the recognition that we have a culture and a civilization, as well as a religion-Kultus and kultur.

B The creation of a new literature

Yiddish is fairly old as a spoken language and common for ordinary business affairs.

But nothing serious was ever written in Yiddish—unless it was for the women: Tsena- Reena 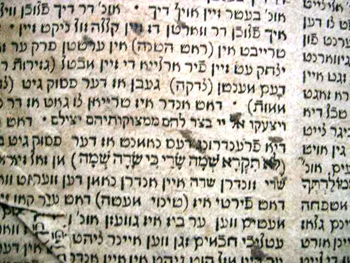 (from my own library)

This page  tells of the change of Sarah’s name, verteitshd and embellished.

Or for the common folk- Bova Meises- which you know as Buba Meises-not grandmother’s takes, but the tales of the Night Bova.! : בָּבָא-בּוּך, בּאָבאָ-בּוּך‎), written in 1507–1508 by Elia Levita, based on Anglo-Norman romance of Bevis of Hampton, but given a Jewish flavor. 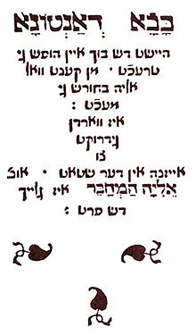 Chasidism was another source of literary Yiddish, because it was intended for the “Amcha”. The collections of Rebbe Nachman of Bratzlav.- prime example. The Hasidc tales, with their flights of fantasy, were an influence on Franz Kafka, from whom we get “kafkasesque”.

The most important of the early writers to follow Abramovitsh were Sholem Rabinovitsh, popularly known by his alter-ego, Sholem Aleichem, and I. L. Peretz.,  The Jewish Mark Twain and the American Sholem Aleichem. 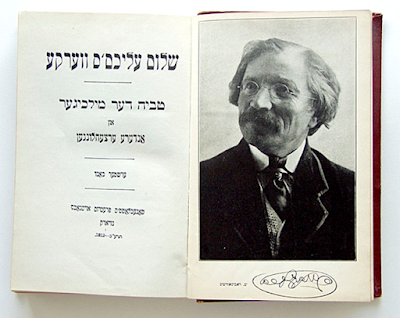 From thence, to Yiddish theater, and then , in America, 2nd Avenue. After most Yiddish-speakers had been murdered by Hitler- we had a Nobel Prize for Literature for I B Singer( Yitzhak Bashevis) , whose stories were first discovered by Playboy!

I had the privilege of seeing him in a lecture-I was taken to it by a Yiddish poet, with whom I had worked as a tutor in an Arbeiter ring school. What does a Yiddish poet tell me of a Nobel Prize winner- His brother was greater! ( I J(Yisrael Yoshua Singer- The Brothers Ashkenazi).

How else would we have gotten early Broadway or Fiddler on the Roof thrilling audiences in Japan, if not for the creation of literary Yiddish.

Images from my library 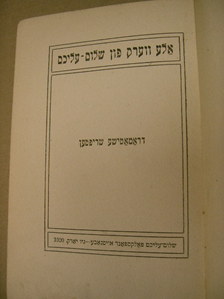 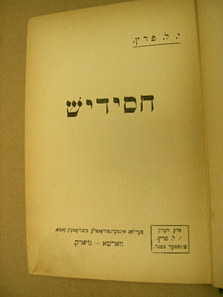 And Chasidish, a collection of tale of Y L Peretz

One Jew-two ideas. One Jew- two languages- Yiddish , as much as it was loved, was limited to only part of Jewry. About the same time as the Boba Meises, there was the first literary work in Ladino: Moses ben Baruch Almosnino's writings from the sixteenth century—the Crónica de los reyes otomanos and several of his letters— Almosnino is considered the most famous Ottoman Sephardi writer, known to both Jewish and Christian audiences. But the Sephardic world in the 19th century was also grappling with what should be the official language of Jews.

A people aware of themselves needed a universal language that could encompass Jews of all lands and all ages- only  Hebrew.

As a student- NYU-uptown, we fought with administration to get Hebrew language. Faculty senate objection- it’s a dead language-  or- it’s a modern language with no literature, like Swahili. Fortunately, our Hillel director was from South Africa, and at the Senate faculty hearings, he taught the professors about modern Hebrew literature and Swahili literature!

Mendelssohn’s associates began publications in Hebrew. Ha-Me’assef (meaning "The Gatherer") was the first Hebrew publication of the Haskalah. It was founded in Konigsberg, Prussia, by students of Mendelssohn and appeared quarterly between 1783 and 1790 and irregularly until 1811.

The first Hebrew Novel-Abraham Mapu (1808–67), the creator of the Hebrew novel, whose historical romance "Ahabat Tziyyon" exercised an important influence on the development of Hebrew.1853.

The Greatest Event in the History of Language- the restoration of a language reserved for worship and study, and often, international business, and  transformation into a living spoken language to meet the needs of the modern era. There needed to be the creation of a pronunciation of a fossil language to accommodate the traditions of the broad spread of Jews- Ashkenazic and Sephardic. The modern Israeli Sephardic pronunciation is the invention of Yiddish speakers who adapted Sephardic sounds.

When I was a Rabbinical student, I directed the center for Jewish students at New York University- I had as a guest speaker, Ehud, the son of Eliezer Ben Yehudah. In those days, every one learning Hebrew relied on his Ben-Yehudah-Weinstein English/ Hebew dictionary. That takes me to Eliezer, his father, who had the crazy idea of not just writing Hebrew, but of actually using it on a daily basis. He came to Israel in 1881, and within 40 years, had all the Jewish community using Hebrew actively, that it was recognized by the British as the official language. He could do this only because he was absolutely obsessed by this- raised one of his children only in Hebrew and forbade the child to play with the other children. So that he wouldn’t learn any other language!

How to make a dead language work in a new world- Israel’s most famous fruit- The Jaffa Orange!  No such thing in Hebrew. So you take an apple- Tapuakh- make it gold- zahav- tapuach zahav and you get “ Tapuz”. 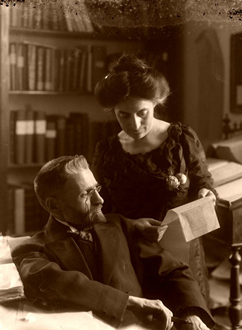 There was an outpouring of creativity in Hebrew. My father’s uncle published the Hebrew language newspaper in Vienna, Davareinu. The father’s of modern Hebrew  literature- Chayim Nachman Bialik, Tchernochowsky, to Amos Oz

And a Nobel Prize- for Shai (Shmuel Yosef) Agnon! 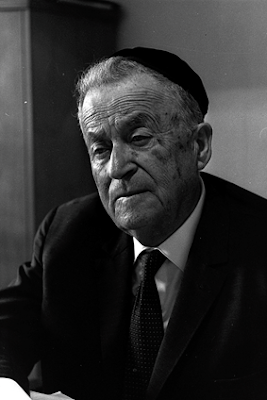 Today, writers in Hebrew are creating stories and filmed productions that are now being transposed into American film and TV.